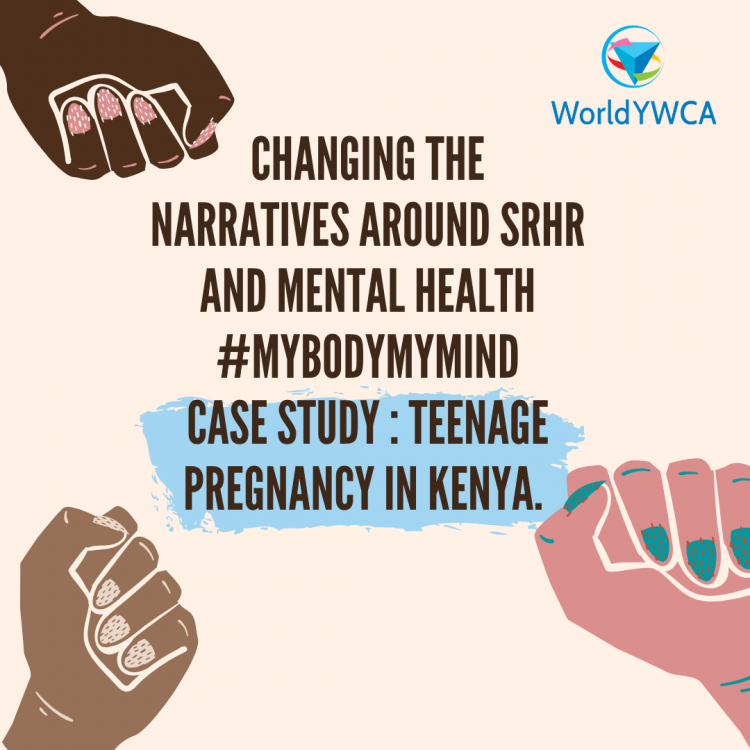 Lucy Ayieko is twenty-four years old. She’s a comedy person, she says. Her favourite series, right now, is “Blackish”. Growing up, Lucy had two sisters and two brothers. She remembers her elder sister always being the one burdened with household chores, while her brothers got off scot-free. One time, she dared to ask why that was. “Because he is a man,” she was told, “and these aren’t jobs for men to do.”

For years, the matter was put to rest – until an unexpected conversation with a college lecturer changed everything. At the time, Lucy was looking for a place to work as an attaché. Her lecturer immediately recommended that she meet with the programmes officer at the YWCA.

“I still remember the posters that were in her office,” Lucy says. “There was all this artwork by YWCA youth members. That kind of talent promotion really appealed to me”. Today, Lucy is a YWCA field officer and SRHR and mental health champion for Kenya. She describes the country as very fragmented in its social attitudes – with capital Nairobi often worlds apart from more rural areas like Tana River.

“You’d never guess, walking around Nairobi, that you were in a country where an estimated one in five women aged between 15 and 49 years old has suffered female genital mutilation,” she illustrates. Yet, most of Lucy’s work doesn’t focus on FGM, but on teenage pregnancies. In Kenya, one in five girls aged between 15 and 19 is either pregnant or has given birth.  “Teenage pregnancy has somehow become the central issue not only because of its magnitude, but also because it links to so many other ones – gendered poverty, sex education, menstrual shame…”

Lucy tells the story of a young girl who committed suicide after a male teacher mocked her for staining her dress with menstrual blood. This kind of “period shaming” pushes girl to either self-isolate, or to go to dangerous means in order to access menstrual products. “Some girls will sleep with boda-boda drivers – unprotected – just to get the cash they need to buy pads,” she says. “This repeatedly exposes them to the risk of early and unwanted pregnancy.”

For others, teenage pregnancy is the indirect result of living in closed quarters. Children overhear their parents through the flimsy partitions that divide single-room households. “They then want to replicate what they’ve seen ‘the grown-ups’ do, but without understanding it or knowing how to do it safely,” says Lucy. Finally, some pregnancies are the result of teenagers no longer being able to afford school, and viewing early marriage and child-bearing as their only way out.

The way Lucy and her team try to address teenage pregnancy is as multi-faceted as the phenomenon itself. “First, there’s the issue of sex education,” explains Lucy. “We’re still hearing myths like ‘I won’t get pregnant if he doesn’t go all the way in’. But myth-busting isn’t enough. Some teenage mums have told me that even if they’d had the right information, they would do it again because of the peer pressure they were facing.”

Tackling peer pressure is also a way to involve young boys who often feel unconcerned by the matter. “When a boy is confronted about getting a girl pregnant, the reaction is usually to deny all responsibility,” recounts Lucy. “Their lack of awareness and accountability is part of the problem.”

To fix this, YWCA runs workshops and trainings of trainers where both genders, across various generations, jointly discuss sex education and the female body more broadly. “We’re trying to ‘undo’ the habit of only talking to girls about menstruation. Boys and men must learn about it too, as a natural process that all of the women in their lives go through”. Once trained, participants are then encouraged to run activities in their own communities. “Building a self-growing network like this is the most organic and efficient way to get through to those more hermetic areas far out from the city”.

When a teenage girl does get pregnant, people like Lucy are there to mediate between them and their parents. “We’ve seen disappointment, denial, disowning… What we’re most afraid of is when parents end up chasing a scared, pregnant girl into the arms of an abusive boyfriend, or into the streets where she resorts to dangerous survival techniques”.

Isolating a young mother is incredibly dangerous given the high rates of depression and suicide they are known to face. Here again, YWCA strives to provide support by connecting young girls to one another, and opening safe spaces where they can share day to day struggles, slip-ups… and successes.

“I remember this one girl who had two kids – The girl used to be my personal friend, we knew each other before joining the YWCA. She had her first baby at 17 while in an abusive relationship so sometimes she would go silent. Then when we talked or met, she would be recovering from bruises she got from the boyfriend, and I had no way of helping her but to just lend an ear and listen. Years later, I joined the YWCA and learned about safe spaces. That’s when I invited her to join – and she’s been part of the YWCA safe space ever since”.

“Just having someone to talk to when you’re going though things like this helps,” says Lucy. “We were able to get through her most suicidal thoughts, together. And as time passed, even she confessed how helpful and reassuring it was to have a group of peers to get through this with”.

Today, the young woman runs a business selling second hand clothes. Her children are all healthy. She has permanently left her partner, and regularly brings her youngest to the YWCA safe space. Her story is one to hold onto as the COVID-19 crisis paints a bleak future for the other women and girls facing Kenya’s lockdown with their abusers. The current situation has also made access to social services more difficult; deprived many of the safe spaces offered by their school; and created economic uncertainty where debt, substance abuse and transactional sex are known to thrive.

In times like these, the activities being undertaken by YWCA are crucial as they tackle a multi-dimensional issue in a multi-dimensional manner. Better sex education, inter-generational dialogue, family mediation, and mental health support are all parts of the bigger picture that Kenya’s young women and girls need up on the mantelpiece to weather through the pandemic’s toughest challenges.