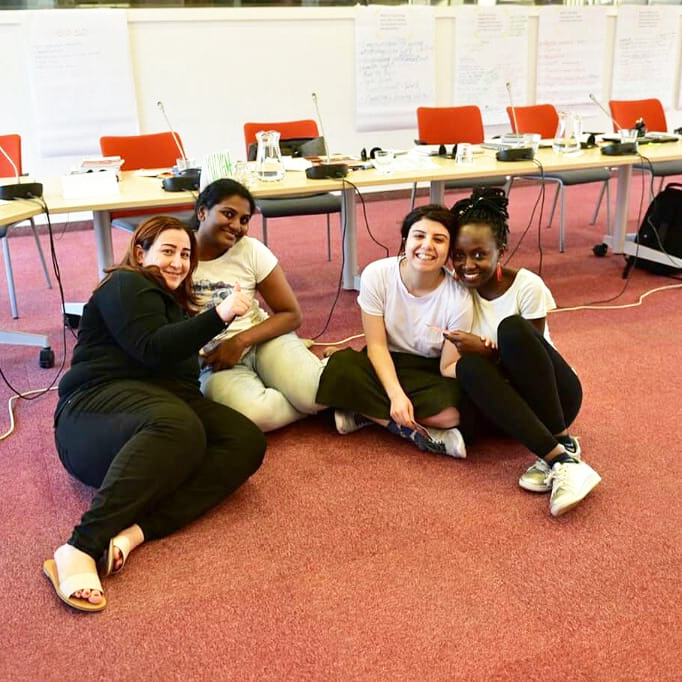 "Just because it does not affect you does not mean you that you can’t be involved".

Three weeks after my arrival to Geneva, Switzerland as an intern for the World YWCA, I got the opportunity to attend the 18th European Study Session hosted by the European YWCA, in collaboration with the Youth Department of the Council of Europe.

The study session took place in Budapest, Hungary (Side note; Budapest should definitely be on your travel bucket list options). I was a bit nervous but also super thrilled and just couldn’t wait to meet and interact with young women from all over Europe with whom I shared common interests. Nothing makes me feel more upbeat than a group of feminists! That’s when you know good tidings are on the way.

At the European Youth Center in Budapest, 40 YWCA young women leaders from 20 countries converged to talk about the rights of young migrant and refugee women across Europe.

I am going to share highlights of the life-changing session with the hope that this will motivate you to start conversations about intersectional feminism.

The first time I heard the term “unconscious bias” it was from Olga Franczak, a lawyer and doctoral student at the University of Surrey. Unconscious bias simply means social stereotypes about certain groups of people that individuals form outside their own conscious awareness. It is more like describing or categorizing people but not actually saying it out loud. Guilty as charged! I am biased, and probably so are you! Everyone is unconsciously biased because our brains process 99.9% of information unconsciously. Everyone holds unconscious beliefs about various social and identity groups; refugee and migrant women included.

These beliefs bring favoritism of one group over the other. In the workplace for instance, it determines who gets hired, who gets new opportunities and resources or whose voice is listened to. We cannot completely get rid of unconscious bias, but we can learn how to recognize it and lessen its impact in our everyday lives.

Before you get in deep thought about unconscious bias, has it ever occurred to you that supporting young refugee women does not just end at fulfilling their basic needs? Yes, they suffer from low self-esteem, severe homesickness and boredom. Non-immediate needs are important to them just as they are to everybody else. And so, opportunities for personal development and recreational activities are essential in changing the way they feel about themselves. Marcia Banasko, co-founder of One Love Soul, a humanitarian project which uses dance, music and sport to promote the wellbeing of refugees put this into perspective. Together with her partner, she travelled across refugee camps in Europe and helped bring a feeling of togetherness through a language which everybody understands; music and dance!

Sarah De Latte, an author and illustrator took us through a simulation exercise which involved moving from one country to another (enacting the movement keeping in mind what the global map looks like) It was easy, predictable and fun because we moved voluntarily.

We repeated the exercise but assumed the position of refugees being forcefully moved out of their countries into the unknown. The journey was scary, difficult and hopeless. This exercise was very emotive. It is always easy to ignore what migrant and refugee women go through as they try to run into a safe haven. It would make their work easier if we wholly accepted them into our communities and helped them adjust and settle down.

Generally, young women go through harsh realities everyday including sexual violence. It is even harder for young migrant and refugee women as they try to fit in their new communities. In a bid to show how deep rooted this is, Sodfa Daaji, Chairperson of the Gender Department in the African Youth Movement led us through a #MeToo experience. It was emotionally disturbing to read all the confessions from young women. A clear indication that sexual violence is still rife in the world. The question that begs is, what are you doing to make the experiences of migrant and refugee women better?

At the end of the session, we had a debriefing towards calls for actions where in small groups we assessed the needs and concerns of migrant and refugee women in regards to what we had learnt the whole week. A working group was formed to develop recommendations to be adopted by National YWCA’s. I volunteered to be part of the working group. Together with six other young women we burnt the midnight oil to ensure that we came up with practical and efficient recommendations.

We crowned the week with an empowerment gala. We ate, danced and sang our voices hoarse. Getting the opportunity to meet all these amazing women and learning what they are doing was very inspiting. Budapest was without a doubt a good destination to make life time connections.

My experience in the study session was truly empowering, insightful and served to put into perspective things that I had hardly given any thought in regards to young migrant and refugee women, largely because I have never been directly affected. But hey, just because it does not affect you does not mean you that you can’t be involved.