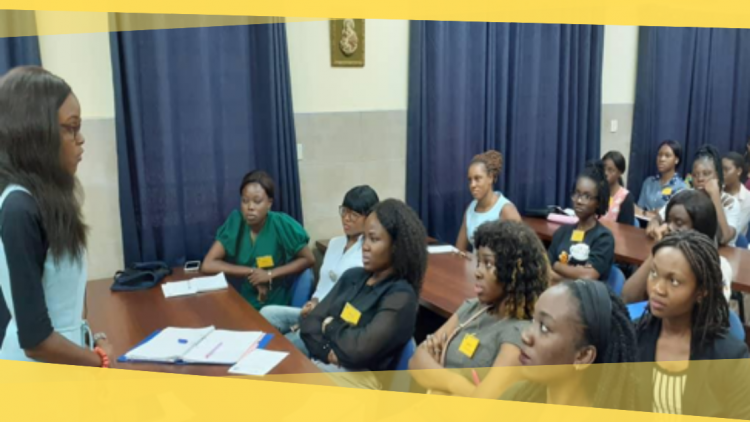 Story published as submitted for the contest “Story of Change”. Osaruguemwen Benedicta Ogbeide won the third price of the contest.

As a young woman, I never dreamt I would be a teacher. My heart desire was to become a diplomat. This burning desire influenced my decision to study Political Science in the University. I graduated with a First Class Honours in Political Science. People challenged my decision to teach and said I had a better chance in big companies where I would earn a better income, but to me, money is not my motivation. I am doing what I love and have passion for; I am touching lives and rewriting the future of children, which to me is total fulfillment.

My journey in the education space started with an internship in a Montessori School in Lagos, after which I started working as the administrative officer in the school. While working in this school, my passion for education started growing. I realized that I really enjoyed working with children. I also gained knowledge about the education system within and outside Nigeria. Building on the experience gained, I became sensitized about the lack of educational opportunities for those without the financial means.

With the clarity of purpose to impact children from lower economic backgrounds, I accepted a role as a fellow of Teach for Nigeria – an organisation that recruits promising future leaders from various disciplines to teach in underserved schools in Nigeria and equip them to become exceptional leaders even beyond the classroom.

I was posted to a public school in an underserved area in Lagos and in September 2017, I started working as a full time Teacher-Leader of Primary 4B, an arm of the Primary 4 class in the school with about 50 students in my class.

Major challenges I faced when I started working at the school were the language barrier and the inability of my Primary 4 pupils to read and write. I realized that many of the children did not understand English. They spoke and understood the Yoruba language, which I could not speak or understand. In order to tackle this communication problem, I bought a book to help me learn and understand Yoruba. I dedicated time to learn and speak the language. Whenever a child spoke to me in Yoruba, I would understand bits of what they were saying, reply in English and teach them the correct way to say what they had to say in English. I also solicited for funds from people to buy books and created a small library in the classroom. We invested more time in practicing how to read and write in the class. I watched as their interest in speaking and learning how to read and write grew because of this.

By the end of the first term, I was gaining ground in my class. I was gradually investing in my pupils. I was steadily changing their mindset from what they grew up with in their community to what they could be outside that community. I put in more effort into helping my pupils see that their future is bright despite their current situation.

My colleagues from ‘Teach for Nigeria’ also posted to public schools in the same compound were a great support to me. As young women below 30years just entering the education space, we stood by each other. Those five wonderful women were proof to me that when women support each other, we can achieve more. In my few years as a teacher, I have had several of my pupils especially the girls who were shy and fearful about the future tell me how they have learnt so much from me and how they believe they will do great things in the future. Many of my female pupils would tell me how they would be great people in the future no matter the challenge they faced because I told them they are conquerors.

As a young teacher-leader, I have seen that nothing is impossible as long as you set your mind to achieve that thing. Challenged and discouraged by many people when I chose this path to become a teacher – the youngest teacher in the school, I did not give up. I believe other young women can push through whatever fears and challenges they go through and transform structures to become great leaders.

I would advise young women across the world never to give up. Women are strong and we can achieve whatever we put our minds to. If they tell you, it is too hard or tough, push through; if they tell you are too young, it is best when young; if they tell you, you are not good enough, that is when you are at your best. Always believe in yourself and know that you are enough!