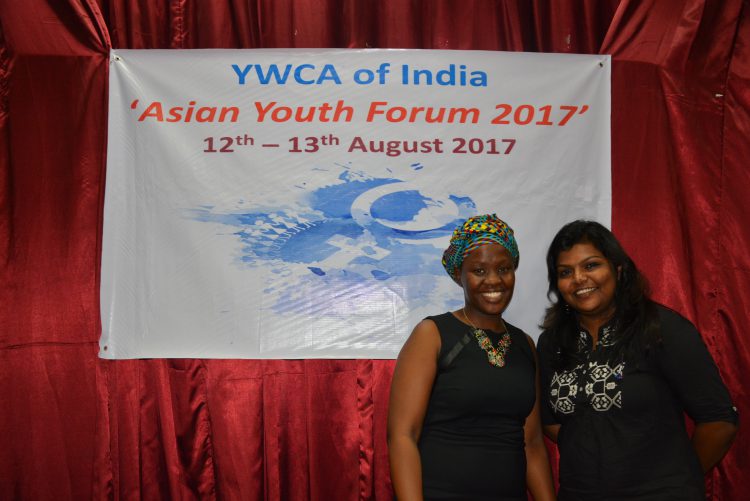 That is when I realised that the change I make today will ultimately create a ripple.

On this year’s International Youth Day, I flew miles away from Geneva to join YWCA sisters from Asia region in Delhi, India. This was a significant trip for me professionally and personally because of the common values I have with these sisters-our faith in Christ. It was an awesome experience to connect through worship and dialogue about safe spaces and the challenges of being a minority group in the region. I was welcomed with a quite warm and very humid weather, nonetheless, I was excited. During the first day of the forum, I met a young woman named Dhiya Ann Matthew; she’s a 28 year old General Secretary, which is amazing and why I believe her story is remarkable to share.  This is her story and views on young women in leadership and her hopes for the wider movement. Her belief that young women can be in leadership should inspire other young women in the movement that it’s possible, look at World YWCA Board!

“Hi, I am Dhiya Ann Mathew. I am 28 years old and I come from a village in Kerala, South of India. I am currently the General Secretary of YWCA of Ernakulam, and was appointed after receiving my MA in in Business Administration in 2014. Initially, I was hired as a Senior Secretary and then promoted to my current post in 2016. As I was new to the system, the first two years gave me an insight into the association and its function. These two years prepared me to handle the responsibility of being the Executive and Administrative Head of one of the oldest associations in South India. Coming from a corporate management background, I wasn’t sure I would manage to work in an organization like the YWCA. I thought wrong! I understood that the responsibilities and duties entrusted upon me required professional assistance whether it be handling the government’s license documents or the public relations with other NGO’s or coordinating activities and programmes at the Y. That is when I truly grasped the potential of this growing movement and the importance of the role of young women professionals being part of it.

In Kerala, women pursue higher studies to get a job or most importantly, to find an appropriate suitor.  They are forced to take up a profession seen appropriate in the eyes of the society rather than what they want to be. Liberal arts, journalism, social services are fields which are still considered  unsuitable for women to attain career growth, job security, income and most importantly a good suitor. After marriage, most young women settle down with their families, raise kids and build a cocoon around their world where they think they are happy and there is nothing more they can do. I feel that we need to make them aware that women are multi-taskers in our roles as a mother, sister, daughter-in-law etc. In addition, we can be the voice for the voiceless-women are empowering women through organizations like the YWCA.

I foresee more young women coming forward in the role of Presidents and Vice Presidents and other such major decision making roles in our movement, but I believe we have a long way ahead of us before we reach there. Recruiting young professional women leaders into the association can be a good start. Women of today are ambitious and of course they want job security and a good environment to work, but let me also add that they give due importance to the cause and purpose the organization stands for. Taking myself as an example, I would like to substantiate this point. I appreciate the vision of the Board of the Ernakulam YWCA in recruiting me, giving me sufficient training and providing a work-friendly environment for an ambitious woman like me. Apart from my work here, I get to pursue my interests, study further and also actively take part in the activities of the YWCA.  On job trainings, frequent interactions with like –minded young women from different parts of India and even around the World keep the fire ignited in me. This model is very effective and I am positive that every young woman-if given an opportunity- will be more than willing to join this great movement of ours. We need to bring in young professionals for the different roles of our YWCA.

The famous philosopher, Rousseau has said, “man is born free but everywhere he is in shackles”. When it comes to women, they are bound even tighter to the shackles of culture, traditions, gender biases etc. After attending an Asian Youth Conference at the YWCA of India and interacting with the foreign delegates, I was really surprised to note that their issues were not at all different from ours. From the streets of Kyoto to the most remote village in Kerala, we face common issues like domestic violence, gender discrimination, abuse etc. That is when I realised that the change I make today will ultimately create a ripple.  I believe that young women are the force that can channel these ripples to makes waves of change in the world.

We usually say that we need to empower youth as they are the “future leaders”. I believe that we need to change that mentality of ours. The future is now! What we need are young women in leadership roles ‘now’ so that they can be better leaders of tomorrow. Leadership shouldn’t be based on seniority instead; it should be about self-transforming Leaders. This doesn’t mean we should keep aside the expertise and experience of the senior members. No one can disagree that they are the backbone of our association. My vision would be collaborated efforts of the seniors along with the youth of the association. That is how we can sustain the youth in our Y. Senior members should act as mentors for the young members, introduce them to the decision making process and guide them through it. It is well-said that true leadership doesn’t create new followers but new Leaders.“