Home » A Teenager’s Curiosity That Borne A Global Leader 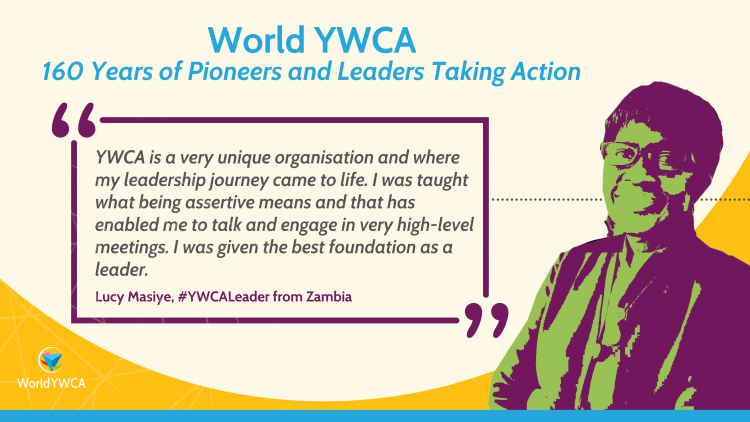 Learn to cook, take care of the family and get married off. For decades and even now, this has been the sequential reality of very many young women and girls. A desire for something different is frowned upon, forcing women to continue living in the cocoon of already written rules. This trajectory never appealed to Lucy Masiye, she knew she wanted something different even though she did not quite know what that different looks like or what it means.

Blooming into womanhood and learning the ropes of being a teenager Lucy joined the YWCA movement in Zambia out of sheer curiosity, a curiosity that would give birth to three phases of her YWCA story. It was a curiousity that created a global leader – assertive and passionate about her own life and the lives of women, young women and girls in the broader women’s rights movement.

While her teenage peers were coming to terms with body changes affecting their self-esteem, Lucy was being nurtured in the YWCA family to be self-confident- a key lesson during her first phase of engagement with YWCA. Equipped with the most important asset of confidence and surrounded by a tribe of women mentors, Lucy’s interest and passion for the women rights movement was validated.

She desired to be part of the revolutionaries who were marking the beginning of a better tomorrow for young women and girls. She learned the art of getting-things-done and skills that to sustain good change within her community, skills which later she saw as her entry into leadership. “I was not aware back then that what I was doing was indeed showcasing leadership”, Lucy remarks.

Armed with self-confidence, leadership skills and working with a collaborative group of women with a common objective, she would be part of a generation that changed the perception of violence against women and girls and she would be at the forefront of those challenging the enablers of patriarchy and demanding equal rights. In a few years, as she experienced more and other demands of life took over- she moved away from her space in the YWCA. Lucy did not know was that she would be driven back to the YWCA world.

She recalls her second phase in the YWCA world in Zambia. Her first work when she moved back from South Africa was helping child survivors of sexual abuse to get justice. The unending journeys to the police station and the corridors of courts affirmed her purpose within the women rights movement and all that she had learnt at YWCA during her first phase as a teenager. She knew her calling.

As she helped survivors of abuse have a second chance in life, she was a valuable leader within the community and from time to time she was given the responsibility to take leadership within the YWCA national chapter of Zambia. She assumed different roles and responsibilities including being the National President and facilitating the YWCA regional meeting in Harare to attend a World YWCA Council meeting in Brisbane, where she took up even more leadership roles.

When asked why she has stayed within the YWCA movement for such a long time, the soft spoken yet firm leader states,

“ YWCA is a very unique organization not just as the oldest women rights movement but this is a place where my leadership journey came to life. I was taught what being assertive means and that has enabled me to talk and engage in very high level meetings because I know I was given the best foundation as a leader.”

Lucy recalls a time that she was invited to a high level meeting that was totally unrelated to her work within the YWCA movement and she showed up fully dressed in YWCA attire. The purpose was to get buy-in and signatures to end child marriage, from decision makers. The petition was later presented to the United Nations. It was a bold move and one of the very many incredible achievements for a young woman who had joined the movement out of curiosity.

She says, “Every woman is vulnerable, but young women are the most vulnerable hence it is the responsibility of each and every one of us to protect young women. The reason as to why YWCA continues to thrive even in the local communities is because people’s realities are reflected in the projects being implemented. The fact that we are a movement that promotes intersectionality and fully embraces multisector approaches to programme implementation is the reason why we still stand strong today after decades of existence.”

Lucy acknowledges that there has been a pervasive lack of women voices in the global development agenda and she is keen to remind us that it is possible to achieve all the development goals that we have envisioned for ourselves and the future generation including the Beijing declaration on women rights. She insists that organizations need to be keen and learn from the YWCA model of implementation, which encompasses breaking human rights into different segments and having a clear step by step pathway to do the work.

During our conversation with a dedicated wife, mother of three and President Nominee of Rotary International Zambia, one cannot fail to notice how self-assured and poised she is. It is almost impossible to imagine a single person can embody such level of confidence and very rich leadership skills while remaining so humble and grounded.

Today, as a board member of World YWCA , she recalls how YWCA has not only given her a platform and position but also opportunities to better herself at every point – training in relevant areas, building her capacity, and listening to her own voice. She recalls her process of getting elected as a World Board member in 2015 – where she was pushed by a few members in Africa as “you look like someone who can represent us”. As a SheDecides Champion , Lucy builds strategic partnerships to solve the issues of reproductive rights and bodily autonomy. She also chairs an organisation which is building entrepreneurship- Maluba in Zambia as a safe space, using her unique skills of YWCA and working with women to ensure they have the space they need to grow in Zambia.

Lucy Masiye is a representation of what young women can achieve given the right tools and platform to grow, explore and be given the spaces to do what they want.

World YWCA will continue to provide young women and girls with the tools to be pioneers and leaders in this world. We go beyond capacity building and leverage on the individual potential of each and every woman in our local communities. When you donate to World YWCA, you ensure leadership efforts are community driven and informed by local realities through powerful leaders like Lucy who collaborate with partners and organisations on a shared vision.

Today we ask you to support World YWCA organization and make it possible to reach out to as many young women and girls as possible. As the world continues in crisis, with a dearth of resources and absence of powerful value-based leadership, World YWCA needs you  to help us impact communities and lives, through such powerful leaders like Lucy.