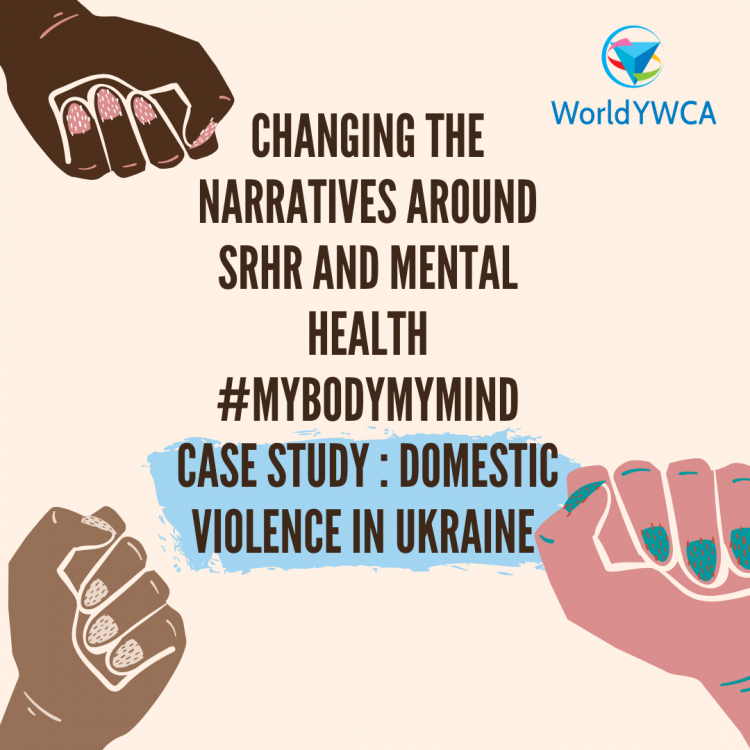 In Ukraine, conflict and the recent lockdown compound a domestic violence crisis that many still aren’t ready to talk about.

Vera still remembers the exact moment she knew she wanted to join the YWCA. She had been invited to an interactive seminar, held by her sociology and gender studies professor. Incidentally, that professor was also the founder of YWCA Belarus.

“I remember meeting all of these different women, who had different views on different issues, but who were still coming together to puzzle out shared causes. It was a kind of conversation I had never seen before, but that I knew I wanted to be a part of”. At the time, Vera was grappling with her own views on feminism, unsure of how it should influence people’s identity and politics. “This was a place where it was okay to ask these questions. You would debate very practical issues – menstrual cups or emergency contraception – while crafting eco-friendly shopping bags, and exploring the links between women’s rights and green policies.”

Every month, Vera would return to these meetings, and slowly went from a YWCA volunteer, to a member, to her current position as YWCA Coordinator for Eastern Europe. “I really liked that I could pick my own pace. There was no pressure to be anything I wasn’t ready for,” she says. In her current role, Vera focusses heavily on violence against women. And one country that repeatedly comes up, she confesses, is Ukraine.

“To be clear, this isn’t about pointing fingers at Ukraine. Domestic violence exists there just as it exists everywhere else,” she clarifies. “The issue is that the conflict there has exacerbated certain dynamics, while making state support or resources much harder to access.”

Indeed, different organisations have noted that the conflict sparked a tendency for women to return to more traditional gender roles and patriarchal models of marital relations “as a survival strategy”. Some also became the sole providers or carers for their families, restricting their freedom of movement and livelihood opportunities. These impact on a woman’s willingness and ability to report domestic violence and seek help after an altercation.

Moreover, if a woman does seek help, she might find that local services are already overwhelmed with victims of human trafficking; transactional and survival sex; and conflict-related sexual violence. If she somehow makes it to a police station, there is a chance that she will face skepticism or harmful mentalities. Indeed, a 2017 survey among criminal justice practitioners had showed that 39 percent believed domestic violence was a private affair, and 60 percent thought that victims could be partly responsible for provoking the violence.

“This isn’t to say that there hadn’t been any signs of progress,” says Vera. “New legislation had been proposed, a specific police unit had been created and trained… it wasn’t perfect, but it was something”. YWCA Ukraine had also run its own programme, looking to increase participants’ knowledge of what constituted gender-based violence. It included an introductory course on Ukrainian laws regarding women’s rights; a week-long physical and psychological self-defence training; workshops educating students on human rights and gender equality more broadly; and an advocacy campaign that included information on violence in periods of unrest.

Unfortunately, this wasn’t enough to prepare the country for the spike in domestic violence it would witness under quarantine. During the first month of lockdown, Ukraine’s domestic violence hotline saw a 38% increase in calls. Respondents scrambled for places to send callers. Unfortunately, the country’s shelters, already far too few – capital city Kyiv has only two for three million inhabitants – were full before the pandemic hit. With no public transportation available, women are trapped at home with abusers that the police are unable or unwilling to kick out.

“For me, this is where supporting female entrepreneurship and financial stability is crucial,” says Vera. “If your response to domestic violence is shelters and legislation, you’re not actually providing a way out, in the long term. And this becomes visible in times of crises.”

Here, too, YWCA Ukraine offers support. The organisation has organised several professional courses for women at home – for instance, in computing or English language classes. They also provide women with remote personal development training, in order to raise their self-esteem, identify their strengths and combat their fears. All of this is on top of psychological support and more localised, mental health projects catered towards domestic violence victims as well as internally displaced persons that YWCA members try to help find shelter and employment for.

“I guess a good part of what we do, other than advocacy, is connecting people,” says Vera. “Connecting them with resources, with other people, with other projects… it’s what I like the most about my job. That feeling of ‘oh, hey, I know something or someone that can help you’”. As for what her least favourite part of the job is, Vera confesses “the minutiae amount of knowledge you need to have about completely different contexts. Our work is so deeply social in nature that, if we want a relevant and effective programme, we first have to have a good understanding of local socio-cultural dynamics. Only then can we project how the things we do will play out, concretely.”

When she isn’t bingeing on context analyses, Vera is pursuing a Master’s degree in population and development. She’s also a teaching assistant for a gender and development course. “I like teaching, but I prefer ‘informal’ education – workshops, trainings, interactive seminars”. Toying with the idea of becoming a youth trainer, Vera adds “I want to host more inter-generational conversations. I think that’s one of the YWCA’s biggest strengths – being able to bring together and create support networks among people of different ages.”

I ask Vera if, as a teacher or youth trainer, she would invite her students to YWCA seminars in order to discover the organisation’s work. Her response doesn’t miss a beat: “Absolutely”.