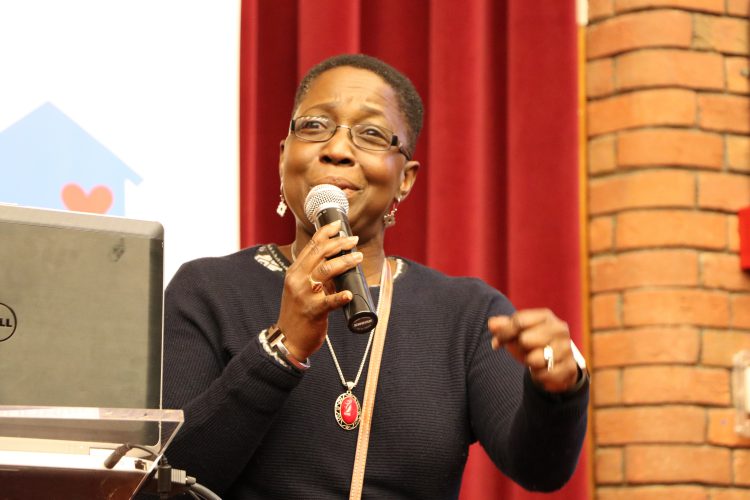 One of my favourite quotes is by Eleanor Roosevelt: “…..tho the responsibility seems great, I’ll just do my best and trust in God.”

For those of you who aren’t familiar with her, Eleanor was the longest-serving First Lady of the United States. She spent 16 years in the White House in the 1930s and 40s and was particularly well recognized for her work on women’s rights and refugee rights—as well as for completely redefining the role of the First Lady by being outspoken and actively involved in the relevant issues of her time.

When I reflect on Eleanor’s persistence, her willingness to take responsibility and the way she stepped up and took action on the critical issues of her time, guided by her faith, I see her as a great inspiration for women and young women everywhere. Even now more than 70 years later.

We are at a critical point in history both in terms of the history of the world and in our history as a YWCA movement. Quite simply, our rights as women are under threat, and many of the decisions that world leaders are taking affect not only their own citizens, but also women across the world. We need to drive transformative change, and we need to do this urgently.

We are also living in a time of ongoing conflict in many different countries and regions around the world and we know that women are most adversely affected in these situations.  I draw your attention particularly to the escalating tensions in Jerusalem between Palestinians and Israelis and between North Korea and its closest neighbours, South Korea and Japan, as well as the wider region.

Because of these conflicts, we are experiencing the highest levels of migration and displacement ever on record—65.6 million people globally—half of whom are under age 18.  This will shape the future of our world in ways we can’t yet imagine.

While we are seeing progress on many of our overarching priorities–including women’s empowerment, women’s leadership and women’s rights–progress can be slow. It can feel heavy at times, especially when we face setbacks.

But as with all great challenges come great opportunities. The World YWCA has always played a critical role at key moments in history. We were at the forefront of advancing human rights during the European refugee crisis after World War II, during the civil rights struggle in the USA and during apartheid in South Africa.  We have been promoting young women’s leadership long before young women had a voice in key spaces.

I am confident that women from the World YWCA, in collaboration with women, young women and girls everywhere, will continue to lead the way. But if we want to drive transformative change, we need to stand in solidarity with each other and with all our sisters around the world. Together we can be stronger and more resilient.

It was JFK who said “Let us not seek to fix the blame for the past. Let us accept our own responsibility for the future.” I’m calling on women, young women and girls everywhere to accept responsibility for our own future, even while holding others accountable for their actions. Let’s take the lead and drive transformative change—so we can create the world we want to see. In the words of Ralph Marston, we should be inspired by possibilities without being discouraged by obstacles.