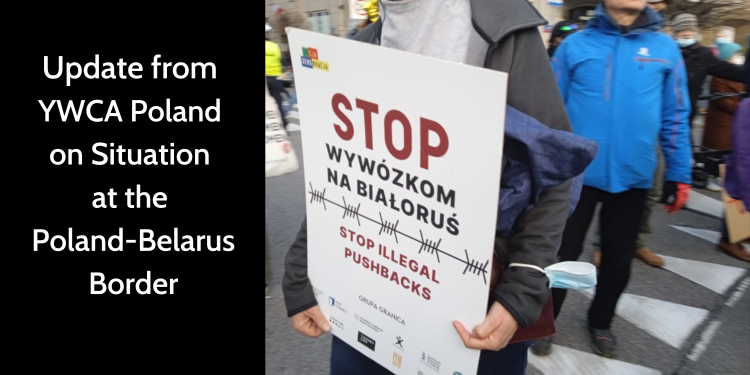 This update has been shared by Anna Haltof, MD (retired), member of YWCA of Poland and volunteer of F.Ocalenie, Salam Lab- Laborathory of Peace from Krakow, Caritas Polska. She has been a teacher on Polish language and culture for six years.

We do not know exactly what is happening along the Border Zone Poland-Belarus, how many people are there, what is the situation of migrants, in particular women, particularly many pregnant women; and children of different ages. There is documentation on death of 11 people. Families from many countries of the Middle East and African sub-continent have come from Belarus, from where they are entering the border of Poland.

At the same time, in mid-August, when Poland officially accepted new arrival from Afghanistan, a number of refugees showed up at the Belarus-Poland border. A special zone for the isolation of refugees was created by the authorities. \

Since September, the border has been closed. Migrants from the border are not allowed to enter Poland. Migrants were not able to return to Belarus due to border security. People are now trapped on both sides of the border. The Polish side used push-back to send people back to the Belarusian border. An estimate showcases hundreds of deceived people trapped, in forests, in swamps, in the cold and freezing.

The government has demarcated a border zone at the same time. No one other than the inhabitants of the 180 villages around the border are allowed to stay there.  Rescuers, doctors, lawyers are unable to reach those in need. Journalists, aid and humanitarian organizations, are not allowed to enter.

The members of YWCA of Poland have always cooperated with all people and all organization from the beginning; creating awareness and promoting to work with and help refugees in Warsaw, especially women. YWCA of Poland believes there is a need to create a humanitarian corridor for women and children immediately.

Since November, demonstrations have been taking place all over Poland expressing opposition to the events at the border. Members of YWCA of Poland are participating to showcase solidarity with those deceived. Campaigns have been launched.

The humanitarian situation is increasingly deteriorating. Calls for help for migrants and saving lives on both sides of the border are increasing every day. We hope to get moral support from our regional and national YWCAs.