Home » We Are Here to Claim Our Space 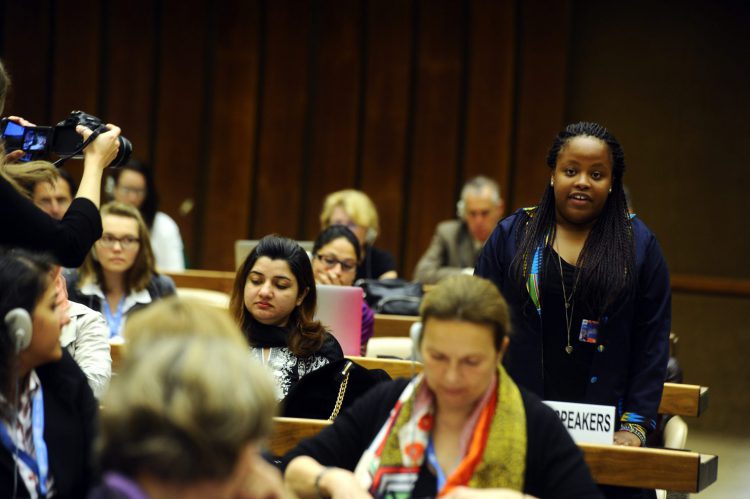 by Rati Muyambo, Gender and Media student at the University of Cape Town

As a young woman who is passionate about gender equality and young women’s issues, I had the privilege of attending the first ever Human Rights Council Youth Forum in Geneva. On the 10th of June, youth from all around the world gathered at the Palais De Nations in Geneva for the 32nd session of the Human Rights Council. It was a long day, but I was so energized by the exposure and experience that I never felt tired.

I had never been to the United Nations before, let alone been involved in issues of human rights on an international level. Just being in the building was satisfying, but it made me sad at the same time. I realised how silent the voice of the youth was. There were men and women in suits rushing from session to session, and I wondered if any of them recognised our presence. I wondered how the atmosphere would be if all those people were youth. The vibrancy would be  electric! We would move mountains in all sorts of places.

The working groups were specifically enlightening. I am in my third year of university, pursuing a degree in Film and Media and majoring in gender studies, looking specifically at Gender and Media. That afternoon, I got to experience and be more involved with issues that concern a lot of today’s youth. It was inspiring being part of such integrated and intergenerational conversations. We discussed many different topics at the forum including gender equality, women’s leadership and youth inclusion in the UN.

The Forum concluded with the youth drafting a declaration that we presented to the High Commissioner at the 32nd session of the Human Rights Council at the UN on the 16th of June. The following issues really spoke to me: for youth to always be at the table at council sessions, our full and meaningful participation in all of their diversities, and the importance of prosecuting those who are perpetrators of intimate partner violence. I also became interested in issues of child sexual abuse, human sex trafficking and marital rape. I completely agree that these should always be treated as punishable offences and prosecuted to the fullest extent of the law. This encouraged and inspired me to seriously think about my thesis around Gender and Media. What about the rights of youth within Media? Food for thought.

In conclusion, I felt inspired and will continue to be involved. I also had the amazing opportunity to present the youth declaration on the 16th of June 2016. It is clear that the youth of today are making their mark as they continue claiming their space, and this is something I am taking back to South Africa as an empowered young woman.All that said, I think as youth, we made a very clear statement, ‘We are here to claim our space, and we will continue holding onto it until we achieve our agenda.’