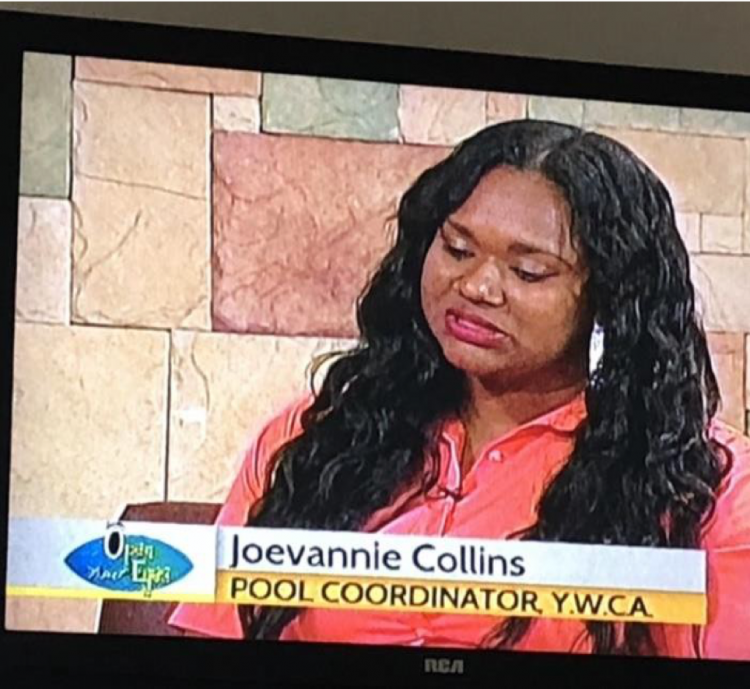 "I have earned my respect in the once male dominated world of swimming and lifeguarding. But even more than that, I have made what was once a rarity become normal and unquestioned".

Story published as submitted for the contest “Story of Change”. Joevannie Shawn Collins won the second price of the contest.

As I sit at my desk, in the uncomfortable heat that has consumed Belize these past few months, thinking about my life, my work, who I am and where I come from – I am humbled and I am proud. So much so, that even at the most oppressive of times (oppressive heat included) – when the easiest relief is to find fault, I find myself finding solutions and seeking remedies.

My name is Joevannie Shawn Collins and I am twenty-eight years old. I am a staff of YWCA – Belize and for as far back as I can remember, YWCA has been a part of my life.

I started my leadership journey as a volunteer with the YWCA swimming program for young and underprivileged boys and girls in Belize. At age thirteen, I was one of a few girls who volunteered to teach swimming at YWCA during the summer time. For some odd reason, summer is the primary time of year when Belizean parents send their children to learn to swim. Fortunate for me, my parents sent me to YWCA during the summers so that I would spend my time doing something constructive. That something constructive led to me learning to swim and becoming a swim instructor.

YWCA –Belize for many years has had (and still has) one of the only accessible, affordable, public pools serving our community. With this reality came a rich opportunity for a young girl, just out of primary school, with no pocket money, no summer travel plans, but rich with self-confidence and a drive to do better and to excel at whatever form “doing better” took .

It should be noted that mostly boys volunteered to be swimming instructors at YWCA in the early 2000’s; it was simply a male dominated activity in Belize at that time. In 2003, when I debuted as a YWCA swim instructor, I was one girl along with 11(eleven) boys. But, it never dawned on me for a second, that, I was anything less than equal to the boys who were my swim instructor peers.

I was just as confident, just as strong, just as skilled and 100 times more graceful – oh the added beauty of being a young woman fully alive, unknowingly transforming power structures.

Since those tender years, back in 2003, I have persevered; I have conquered; I have excelled; and I have stayed the course. Today, I am YWCA-Belize’s Chief Lifeguard, Chief Lifeguard Trainer and Chief Swim Instructor. I am American Red Cross trained and certified – this is a big deal when you look at the reality of what this truly means.

It means: that I train policemen, coast guards, soldiers, tour operators, tour guides and loads of other men and boys, from a wide variety of backgrounds, to be lifeguards. More often than not, it means, I am the only woman in the room, in the pool, in the waters, and it also mean, that at those times- I am the “commander and chief”.

So, here I am, that 13 year old girl, who believed in herself; who embraced the YWCA- Belize and all she had to offer. Here I am, that young girl turned young woman, who heard way too often of the drowning of young persons and decided that I would do my part through the YWCA to promote and educate our community about water safety. Here I am at age 28, finally giving thought to the fact that I plunged myself into male territory, without even a second thought, and look where it got me!

So, as I sit here telling my story, I can honestly say that little did I know that who I am today (an authority in our community when it comes to water safety, swimming instructions and lifeguarding; the YWCA representative who makes appearances on TV/radio shows to talk about water safety) would have been a direct spin off of my girlish fling with becoming a swimming instructor.

I have earned my respect in the once male dominated world of swimming and lifeguarding. But even more than that, I have made what was once a rarity become normal and unquestioned.

Maybe, it is the lifeguard in me… maybe, it is my survival instincts … maybe, I had a point to prove… but without a doubt, with absolute certainty that seemingly insignificant opportunity 15 years ago led to significant change – a seamless, smooth, subtle power shift!