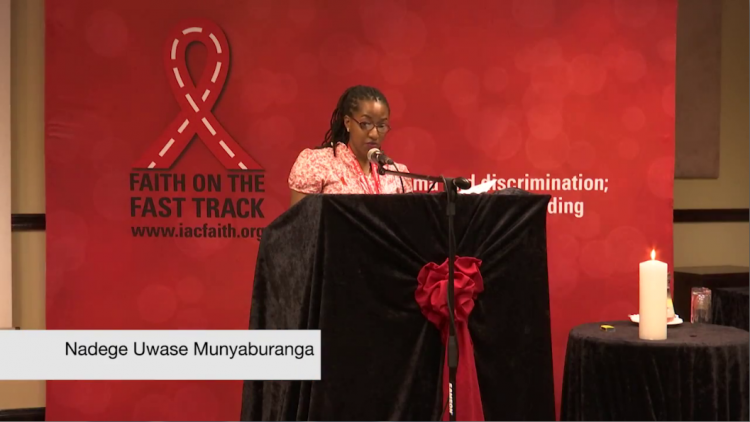 My journey to Durban was a long and hectic one after being denied visas to the beautiful land of South Africa in the name of insecurity despite the fact that I would be under a group of very powerful women from the YWCA! Lucky enough I got to the Joburg airport without a visa, one small sheet of paper from the UNAIDS saved me as they had stated that I am a strong advocate in the country and would represent young people living with HIV at the conference, Viva Advocacy! Viva YWCA!

The first two days in Durban, I and other several young women from different YWCA’s attended the Interfaith preconference which was termed; The Faith on the Fast Track with the theme “Reducing stigma and discrimination, Increasing access; and Defending Human Rights NOW!”

Different people of faith gathered together again in Durban after the previous IAC that was held in 2000 to deepen and expand their response to the AIDS epidemic. The World YWCA was privileged as it had different young women living with HIV that shared their stories, experiences and challenges at the same time calling on the faith leaders to advance in reducing stigma and discrimination for people living with HIV (PLWHIV) in their Churches, I myself was among these young women and a panelist on the first day of this preconference sharing my experience and the importance of the safe space model in the YWCA.

The Opening plenary was preceded by the candle lighting ceremony led by Miss Lyn van Rooyen from the Christian AIDS Bureau for Southern Africa (CABSA) and local organizing committee in respect of the lost souls of those who were living with HIV. Other events at the interfaith pre-conference include the highlights from a video showing how the Church has intervened in HIV response and Fast Track, different workshops around the role of the Church in stigma and discrimination reduction for people living with HIV.

There was also an Interfaith Prayer Service that was an opportunity that linked the local and international faith communities and reflected on how HIV and AIDS touches our lives and gathered in prayer to remember those who have died of AIDS-related illness and all those living with or affected by HIV/AIDS; to celebrate the progress made so far in the global response to AIDS; to reflect on our role as faith-based organizations and people of faith on the Fast Track; and to commit reduce stigma and discrimination, increasing access and defending human rights.

The main AIDS conference opened on the night of the 17th July and was one of the events that got me filled with amazement after the innovative demonstrations of the Sex Workers claiming for their rights and Activists that were not happy about the immense decrease in funds for the Global Fund and other stakeholders in the HIV sector.

The AIDS 2016 conference presented new scientific knowledge and offered many opportunities for structured dialogue on the major issues facing the global response to HIV. The theme for this year’s International AIDS conference was; Access Equity Rights Now. The conference venue; which was the International Conference Center, the Global Village and Exhibitions area were fully packed with delegates both local and international that you would get lost in the middle of the crowd if you were a step behind your teammates!

The World YWCA delegation of young women from different YWCAs participated daily at the Egumeni Safe space Hub, the YWCA exhibition booth and attended workshops and sessions at the Women Networking Zone, the Faith Networking Zone and the Global Village under the leadership of Madam Hendrica Okondo, Ritah Muyambo and Miss Daniela Zelaya who is an intern. Our very own Nyaradzayi was also present but this time around as an Ambassador of Peace. I personally facilitated a workshop about the Mental Health and SRHR of Adolescents and young people living with HIV in East Africa. At the Egumeni Safe Space Hub, we hosted one motivational faith leader to give us advice on daily life issues and lifestyle, some of them include Dr.Manoj Kurian; the Coordinator of the WCC’s Ecumenical Advocacy Alliance and Rev Phumzile from the INIRELA and invitees from other networks.

Another interesting activity that the World YWCA delegation participated in was the “Thursdays in Black” event; a campaign started by CABSA to engage women in fighting against any form of violence done for women and girls around the World, courtesy of a young lady from the YWCA of India; CZ Ralte who honored this day by offering all of us black T-shirts made by her home YWCA under a small project/initiative she started to get people tested in her community. At the same time, the delegation got an opportunity to meet with leaders (Ministers) of the country in Zimbali state and got them practicing the Safe space model with the girls! It was such a privilege to see these leaders taking time to engage in discussions with these young women under a model originally from the YWCA!

At the same time, I was overfilled with joy after being selected to be part of the UNWOMEN youth Advisory Board to represent the other young women living with HIV in my Region, it is such an honor and I can’t wait to introduce to/share with them what the YWCA has got in store for the future mothers of tomorrow!

“People who stigmatize/discriminate you are stupid because they don’t have full knowledge about HIV/AIDS, they are not educated. Just ignore them”Rev. Phumzile Mabizela INRELA

“We will ensure that the communities, health systems, engage with these children in order to not be raped. We need to ensure that the children wesaved five years ago are the ones that will be able to thrive tomorrow and working with faith-based organisations and the slums”  Ambassador Deborah L. Birx