Home » Muna Killingback: A Human Rights Leader, An Advocate for a World Free from Violence of Any Form 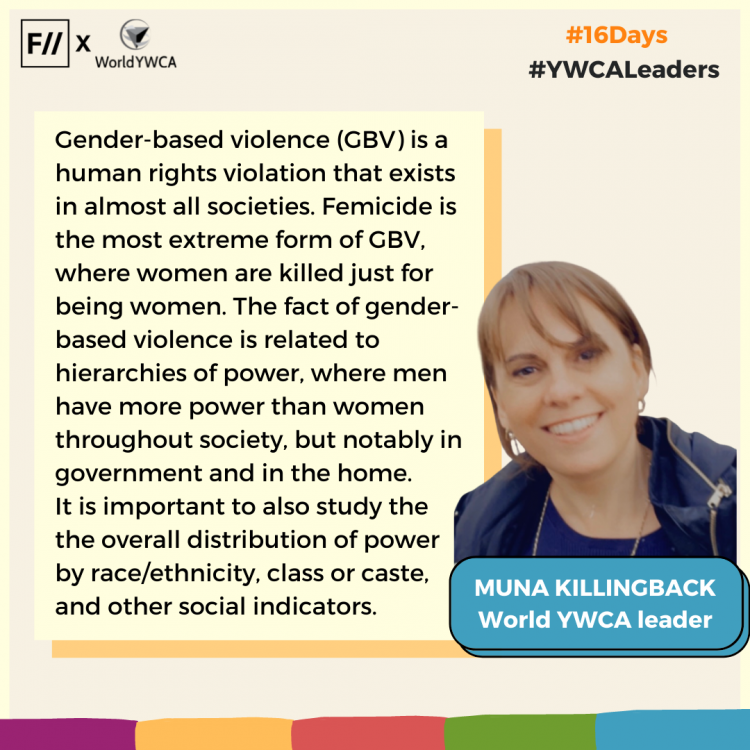 The interview was part of the 16 Days of Activism series of World YWCA.

Muna Killingback has been active in the YWCA movement for decades. She worked for the World YWCA for ten years and was one of the first Young Women’s Interns. She later worked in financial development and as the Director of Communications for the last seven years. Before that, she was Director of Public Relations and Public Affairs at the YWCA of Essex and West Hudson in New Jersey for four years. She stayed active with the World YWCA mostly through the YWCA World Service Council in the USA and currently serves on YW Boston’s Advocacy Committee.

“The YWCA has given women a voice in all kinds of policy forums where they would not have been represented, and this has made a tremendous difference. The YWCA ethos of mentorship and intergenerational leadership were instrumental in her journey and growth.”

How are human rights, GBV and women co-related to femicide?

Gender-based violence (GBV) is a human rights violation that exists in almost all societies and cultures. Femicide is the most extreme form of GBV, where women are killed just for being women.  International and regional human rights instruments that could help prevent GBV and femicide–such as CEDAW and its Optional Protocol, the Belém do Pará Convention, the Maputo Protocol and the Istanbul Convention–are often not fully implemented so that is something activists can focus on. The fact of gender-based violence is related to hierarchies of power, where men have more power than women throughout society, but notably in government and in the home. It is important to also study the overall distribution of power by race/ethnicity, class or caste, and other social indicators to get the full picture of women’s lesser access to power, whereby gender is often compounded by these other factors. For example, in the US, the homicide rate for Black women has increased sharply recently, and little attention has been paid to the disappearance of Indigenous women–if we only look at general statistics about women, we might miss these important facts about women in these two oppressed communities.

How have human rights organisations and movements contributed to combating GBV?

Human rights organizations have raised awareness about GBV and helped to educate grassroots groups about advocacy tools they can use, like CEDAW and its Optional Protocol, to leverage influence over their national and local policy makers. Women’s organizations lobbied for the creation of a Special Rapporteur role at the UN High Commission for Human Rights to look specifically at the issue of violence against women, which has been tremendously helpful.  Some scholars have also brought some important points to light about GBV–here, I would like to specifically mention the work of Columbia University professor Lila Abu-Lughod, who has interrogated some standard narratives about GBV in the Global South, pointing out that some Western feminist focus has been on saving brown women from brown men, which can sometimes serve other unsurfaced agendas.  I would recommend that all GBV activists listen to Professor Abu-Lughod’s talk on The Cunning of Gender Violence and read the forthcoming book on that topic.

What according to you is the critical need of the hour when looking at the intersectional issue of GBV in conflict situations?

I personally think that the critical need of the hour is for more women’s and feminist organizations to work for peace based on justice, and conflict prevention and resolution so we can reduce GBV in conflict situations at its source.  A lot of awareness raising has taken place about GBV in conflict resolutions particularly with the adoption of UN Security Council Resolution 1325 and subsequent women, peace, and security resolutions, and that is very important work. But whether it is a woman or girl harmed by GBV in conflict, or just killed or maimed in an air raid, or a man killed in battle or as a civilian, war is just terrible, and the more resources we can put towards ending war itself, the better off we will all be. We should particularly work to strengthen the UN and give teeth to the International Court of Justice and the Rome Statute of the International Criminal Court so that all countries, no matter how powerful, have to abide by international law. Some will say that this is not a feminist agenda, but if women, who are more than half the world’s population, just say no to war, imagine how powerful that will be.