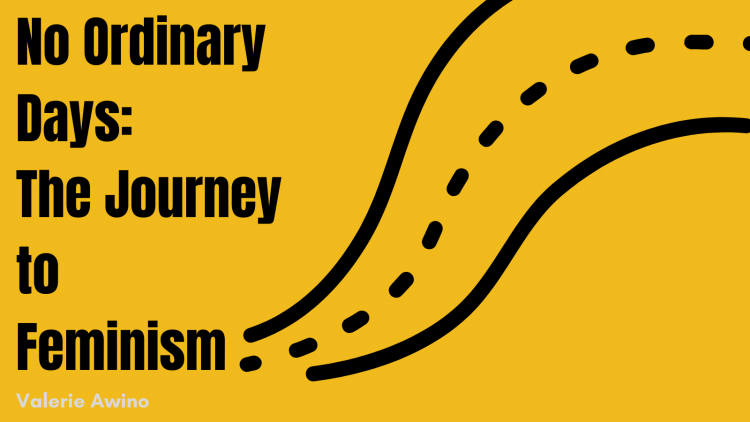 “I wouldn’t know how to be a woman who is not a feminist.” That has always been my answer whenever people ask me why I am very passionate about women and feminism. What they don’t know is I didn’t just wake up one morning and identified myself as a feminist, it has been a continuous journey of questioning a lot of values and principles that I was brought up on which meant I forced those around me to look deep inside themselves and that made them extremely uncomfortable.

When I was 14 years old my parents sent me to a rural primary boarding school in Western Kenya, with the intention that this would help me perform better in the national examinations, thereby helping me go to a good secondary school. True to their wishes I performed very well and was offered an opportunity to pursue secondary school education in one of the best academic schools in the region.

Looking back the transition from a city school to a rural boarding school formed the foundation of my activism. I remember hating school holidays because I already knew the reality that was awaiting most of my friends once they get home. A number of them would not make it back to school when we reopened because their fathers married them off to old men in the villages. That meant all the dreams they had of moving from the small villages where they lived and curate their own name and destiny somewhere else were shattered. It was quite depressing when from time to time I could see them in church with a protruding belly a symbol of a new life within them yet they had long been dead.

During my teenage years I was already aware of the gross inequalities between men and women, sustained and promoted through multiple ways, from the burden of young girls assuming matrimonial roles when they were barely old enough to understand their own body autonomy, girls dropping out of certain subjects while in secondary school because the male teachers who were supposed to be our  mentors were constantly sexually harassing us yet the school administration tenaciously decided to take the side of the perpetrator. In the end we came out of school with wonderful grades that accorded us the privilege to pursue the careers that we want, but on the down side I was wounded, traumatized and angry. Angry because I was not protected from the massive abuse that I went through in pursuit of my education. I cannot remember how many times I had to negotiate with my brain and take the longest route to the classroom just because I wanted to avoid a certain teacher whom we had nicknamed the “King of Sexual Harassment”.

My passion for feminism and activism was validated when I turned twenty years old. I acknowledged that this world robs women from their power in more ways than I can count. Hence, my deliberate intention has been to always fight for the rights of young women and girls especially those who live in rural areas that remind me of my childhood friends who were denied the opportunity to thrive and explore the world on their own terms. One time during my advocacy clinic visit in a remote village, I met a young girl who wanted to pursue clinical psychology as much as her description and the details of this particular career were scanty the passion and the purpose was very much alive. She wanted to restore the dignity and confidence of women and girls in her community and this could only be possible if they relived the violence meted on them not as victims but survivors. I understood very well the world she was describing because that is the world that validates my activism.

2020 has forced me to open the wounds of my teenage years. I have reflected, journaled and asked myself very many questions. On top of the list have always been – Why does the world hate women and girls so much? What do women and girls possess that is so powerful that the only way around it is to stifle our potential, kill us whenever we refuse to conform to the social norms? Whose intention is to make us behave in a certain way that is only beneficial to the enablers of patriarchy?

I will never have all the answers but one thing is for sure – I love being a feminist. I wouldn’t know how to be a woman who is not a feminist.

As the world marks the #16DaysOfActivism against Gender Based Violence, I am constantly reminded of my childhood friends who were denied the opportunity to explore their own potential and burdened with the responsibility of aiding misogyny in the community. I think of all the young girls who constantly have to negotiate with their existence just to avoid being abused. I think of my responsibilities as a young woman to help create a world without violence, a world in which women and young girls can thrive. Therefore this #16Days, I am using my privilege and leveraging technology to amplify the demands of women and girls. I am using my skills in advocacy and social communication to draw the attention of policy makers and urge them to do better. After all, we all need to do better for all women, young women and girls.