Home » The little difference and its huge consequences 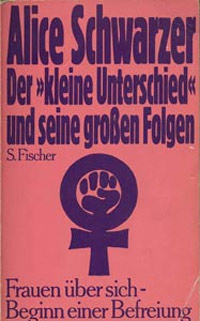 In 1975, the German  and feminist journalist Alice Schwarzer published a book that had great success. Under the title The little difference and its Big Consequences, she analysed the way how sexuality in patriarchal societies is used to oppress women. She said that sexuality is one of the key points, or the key point how patriarchy oppresses women. In her book, she interviewed seventeen women to discover where they had problems. And what she learned was that a lot of women think that the sexual problems they have in their relationships were their fault. Alice Schwarzer wanted to show that the problems weren’t caused by women, but were the result of their oppression by the man-dominated society.

In the interviews, she discovered one big problem for the women: in their relationship, they often had problems to enjoy sex and to have an orgasm. Most of them felt frigid during having sex with their partners, which means they were not able to have an orgasm by vaginal penetration. This experience made a lot of women ashamed, thinking they’re not “okay”, not working in the right way or doing something wrong. But what Alice Schwarzer discovered was that it wasn’t their fault.

Alice Schwarzer concluded that the “myth of the vaginal orgasm (also considering the cultural meaning of penetration) gives the men the sex-monopole with which they oppress women. It gives them the monopole of defining the sexual standards and this monopole of sex gives them also social, cultural and financial monopole in a patriarchal society. Therefore, she asks women to challenge male norms of sexuality because this will also challenge the gender stereotypes, which will lead to change and to female emancipation.

Alice Schwarzer’s book The little difference and its Big Consequences has been translated into thirteen languages and is a must read for feminist readers. Till today, she strongly shapes the European feminism. In 1977, she launched the monthly magazine EMMA, Europe’s only independent feminist magazine. Still published today, it regularly initiates heated debates and campaigns.