Home » “To the young women of my country, I’d like to say that I know it is hard to be a female or a third gender in our country. But don’t let that stop you from believing in yourself.” Get inspired by stories of change, take action by donating to World YWCA

As a young girl, Namrata was raised the same way as her three brothers. The boys in her house didn’t get any preferential treatment. However, as her body began to change after puberty, family and relatives’ perceptions around her also started shifting. Her father was hesitant about sending her to college, but she persisted and enrolled herself.

Today, Namrata is a counseling psychologist with YWCA Delhi, and works with vulnerable and oppressed communities. She interacts with young girls and women who have been sexually abused or harassed, who are single mothers, or those who have been abandoned by their families. Namrata empathetically listens to them, guides them to navigate out of their struggles, and champions for their rights.

During the pandemic, when reports of domestic violence and burnouts started increasing, Namrata responded to the needs of young women by taking up online sessions on sexual harassment and mental health. Besides sharing with them necessary resources for schemes, laws and helplines, Namrata provided them with a trust-based relationship where they could openly engage in meaningful conversations.

Through her inclusive approach with marginalised young women, Namrata has become an ally for these women who come to her to understand how to raise their daughters better, how to provide their children with age-appropriate sex education, and how to make their peers more aware of their rights. In South Asia, topics of sex and menstruation are not openly spoken about, especially around boys and men. “I encourage young mothers to talk about menstruation to their daughters when the fathers are around,” Namrata says. This creates an environment where girls feel safe to open up about concerns related to their bodies.

In a country like India where joint families are common and traditional practices are passed down the generations, gender-biases seep in as soon as a child is conceived. Namrata feels that intergenerational conversations can help break the stereotypes around women’s role and well-being. This is also beneficial when addressing mental health in families where therapy is associated with shame.

“World YWCA enables so many young leaders like me to connect more young women with opportunities to learn and train in the things we want to, and care about,” says Namrata.

Over the last three years, Namrata has been an advocate for mental health, especially for girls, young women and women. She believes information empowers communities, and she mobilises not just young women, but also community gatekeepers, police personnel and government officials to become more sensitive to women’s needs and more responsive to their mental well-being.

For Namrata, joining the YWCA has been like the fuel to her career. She feels lucky and determined to be in a position where she can help women free themselves from societal, familial and mental barriers. “My work has been put to a great cause,” she believes, adding that India needs more young women leads who can advocate for their rights.

As the World YWCA, we will continue to share more evidence from the ground about the power of investing in feminist movements and leaders who embrace the challenges and make real impact on-the-ground.

We know you believe in the power of young women, as we do. Will you invest to make this a reality?

DONATE today – no matter how big or small. 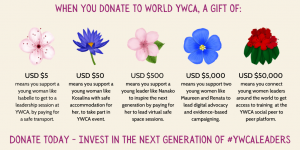