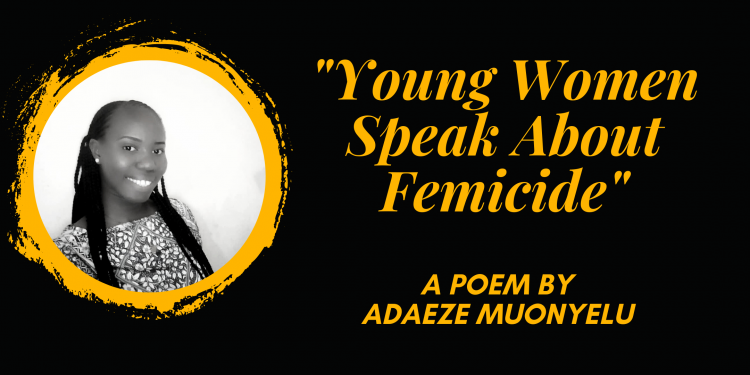 What then is Femicide?

I can be killed because I am a woman

I can be murdered because I was born a woman

This is my story

As a child, everyone wished I was a boy

I saw mother cry just because I was born a girl

I grew to be beautiful

They thought I needed to be married off

My education became a dream never to come true

I am now very old

Fingers point at me whenever a youth dies, they believe I am evil

Femicide was the gender based violence I feared most

Femicide is real, it exists

This is my story

I had hopes my daughters would tell a different story

I wished the news could call it Femicide and not Homicide

I believed governments would wake up to address this menace

I have a question

Why murder women because they are women?

Who informed you to cherish misogyny?

There is synergy in unity

Together we can achieve a world free from Femicide

I have questions unanswered

I hear about the problem

I think about possible solutions

I actively engage in dialogues to bridge gender gaps

Yet, societies remain silent about structural reforms to end gender based violence

Data and statistics of survivors of GBV keeps increasing

Women and girls die in Genocide

They are listed as victims of Homicide

Yet, they are murdered because they are women

No, it is rather reported as homicide

Women and girls struggle to survive in societies cynical by default

Dishonoured girls are killed to protect the family’s honour

Old women are killed because they are now perceived as evil

Women are killed because of their gender identity as women