Home » A perspective on women’s involvement in peace negotiations 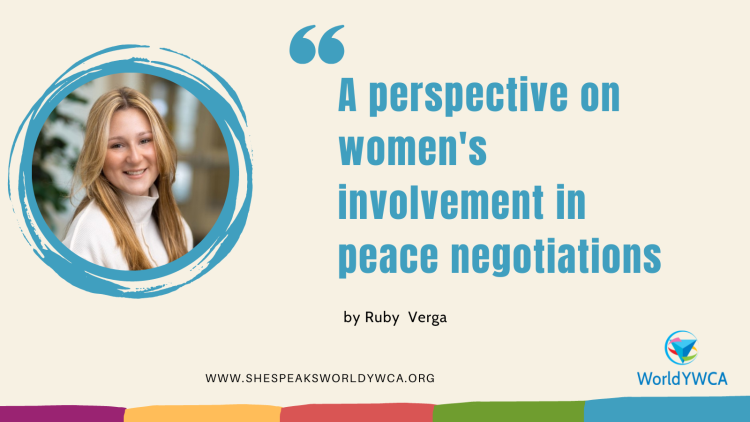 Over the last two weeks, I have had the opportunity to attend both Geneva Peace Week
(GPW) and the Paris Peace Forum (PPF). During the sessions attended there was a focus on the
power of women in peace negotiations and processes. Women have a unique perspective to add
to peace negotiations, and the importance of this perspective is beginning to gain traction with
the international community. In many cultures, women are at the center of community and
community building. They are the ones raising the next generation of people and the ones seeing
the first-hand effects of conflict in a community. This gives them insight into the needs of a
community that men are often unaware of. With the importance of lived experience being
highlighted as well throughout these conferences, it is only natural that women would be
essential to the creation of effective peace negotiations.

However, even though there is research to back up the importance of women in these
negotiations, they are still marginally underrepresented in decision-making. This is the constant
struggle of women’s rights issues, we know they need to be included but society doesn’t give
them the space to be heard. This is why the work of NGOs such as the World YWCA is
absolutely essential. They are the ones doing the work to get women heard. Since its founding in
1855, the YWCA has been using the model of safe spaces as an impactful way to make women’s
voices heard. Through safe spaces, the YWCA is able to enable women to demand their rights
and engage in civil society in conflict and post-conflict areas. In addition, since 1855, 40
Resolutions have been passed by YWCA leaders and the movement. However, this is only the
beginning. The struggle now is getting people to understand the importance of women’s voices.
As a young woman, it is both hopeful and disappointing to attend these conferences. On
one hand, there is progress being made and we are moving along the work of the women who
came before us, but on the other hand, change is slow and what I heard at these conferences were
only words. Unfortunately, in so many situations, these words are not being translated into
action.

In the conference, José Manuel Albares, the Minister of Foreign Affairs, European Union
and Cooperation, for the Kingdom of Spain, spoke about how feminism is a concept that is often
considered to be anti-man. This sentiment is one that, as a young woman, is very upsetting. It feels
in some ways, like a cop-out to learning about and truly understanding what feminism is.
Feminist Foreign Policy does not mean eliminating men from positions of power. It is about
adding the perspective of women. FFP is about focusing on and adding values and good practices
that will lead to gender equality. It is about promoting peace, gender equality, environmental
integrity, human rights, and more. FFP would not only improve the lives of women but all
minorities across the world.

The other qualm that comes with FFP is the idea that by merely adopting this ideal,
countries are making a difference. This is just a fancy name that fails to address the issues
women face. For example, Germany has adopted an FFP but according to a survey that the
Federal Ministry of Family Affairs, Senior Citizens, Women and Youth (BMFSFJ) conducted,
“every fourth woman in Germany has experienced domestic violence at least once in her life.”
Examples like this can be found in all of the countries that have adopted an FFP. This is not to
say that an FFP cannot also be a powerful tool. In Spain, another country that has committed to
gender equality through FFP, women represent 44% of parliament. All this just goes to show
how much more work needs to be done. FFP can be a powerful tool in international relations but
it must also be accompanied by real action and tangible change. There is still so much work that
needs to be done and while opening the conversations at these conferences is important, the issue
needs to be brought back down to the women of communities and they need to be more involved
if we ever want to see more tangible change.