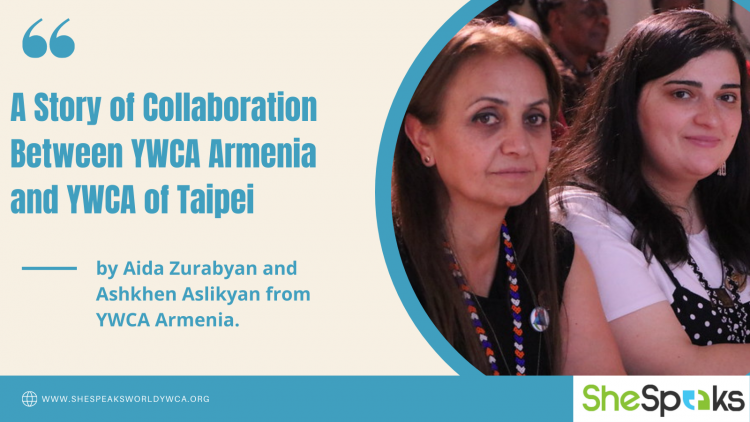 In November of 2020, more than 500 hundred of the most influential and progressive female leaders of the World YWCA movement came together in Johannesburg, South Africa, to discuss the work and future plans during the World Council.

YWCA of Armenia was represented by us, Aida and Ashkhen. It was an excellent opportunity for us to communicate, get to know our sisters from different countries, meet our old and new friends, share our work and stories. After the conference, we all returned to our countries. Many of our sisters may not remember us by name. However, we still carry the same torch. But there were others we have communicated and made a strong connection with, and it is natural as this is how the networking should work.

And this is where the story begins. A year later, we got a Facebook messenger call from Felicia, from the YWCA of Taipei, whom we met in Johannesburg. The call was so casual, friendly, and much needed at that time, as if we were talking to one of our good old friends.

It was September 27, 2020, when the Turkish-Azerbaijani troops attacked Artsakh, and the Armenian people started the struggle, fight of life and death. We were all so depressed, so confused and lost. And most of all, we were upset and somewhat angry with the indifference of the world. At that moment, Felicia’s and other YWCA sisters’ call was such a relief as we knew that we were heard and were not alone. The majority of the Armenian National YWCA activities are carried out in the Noyemberyan community of the RA, Tavush region, which has a 300 km border with Azerbaijan. And our city is only 5-7 km away from the border. Martial law was declared in Armenia; the dangers of the epidemic were replaced by the threat of war. For the safety of our beneficiaries, children and women, we had to stop our daily activities because the building occupied by the organization did not have a bomb shelter. The brutal war shook our minds and souls, broke our hearts and minds, creating a state of inability and helplessness for us.

That was when we both received a call from Felicia, the president of YWCA in Taipei. She said that she remembers us and knows from the world press that our country was at war. We were deeply moved that the women of the YWCA movement, far from Armenia, were concerned about us. Our phone call was very touching; Felicia said that the women of the YWCA of Taipei wanted to organize prayer for us and support YWCA of Armenia in solving our priority problem. It may sound sentimental, but there are no words to describe the Godly nature of this move. The profound philosophy and valuable human deeds cannot be compared to the same humanes’ barbaric act of Azerbaijan towards Armenian people.

This cooperation was crucial and valuable because we were deprived of the opportunity to work in addition to the challenging mental and emotional situation. We didn’t have a bomb shelter which is a priority during the war. We soon received good news. About 200 women from the YWCA of Taipei raised the money needed to renovate and furnish our bomb shelter during an event at the Week of Prayer. We thank God that the YWCA movement is so strong with so many benevolent women.

We have resumed our work, and thanks to the World Council, this excellent, effective partnership has been established with YWCA of Taipei. Thanks to Felicia and our sisters’ efforts, we have a renovated, furnished bomb shelter that will protect the children of the YWCA Child Development Center and beneficiary women, young women and girls from the dangers of war. This is more of spiritual support than financial.  Our new “bomb shelter” is multifunctional and it is called Smart “Safe Space”. It has an educational, playful, therapeutic and entertaining component. Our beneficiaries will learn new emergency response skills, disaster prevention, warfare and protection during epidemics daily.

We extend our gratitude to the YWCA movement, which leads us to kindness and the strengthening of spiritual values. This remarkable story is about the boundlessness of kindness, which is definitely inspiring. We are ready for new collaborations with YWCA sister organizations and individual leaders.

The story of cooperation with the YWCA of Taipei was shared by Aida Zurabyan and Ashkhen Aslikyan from YWCA Armenia.