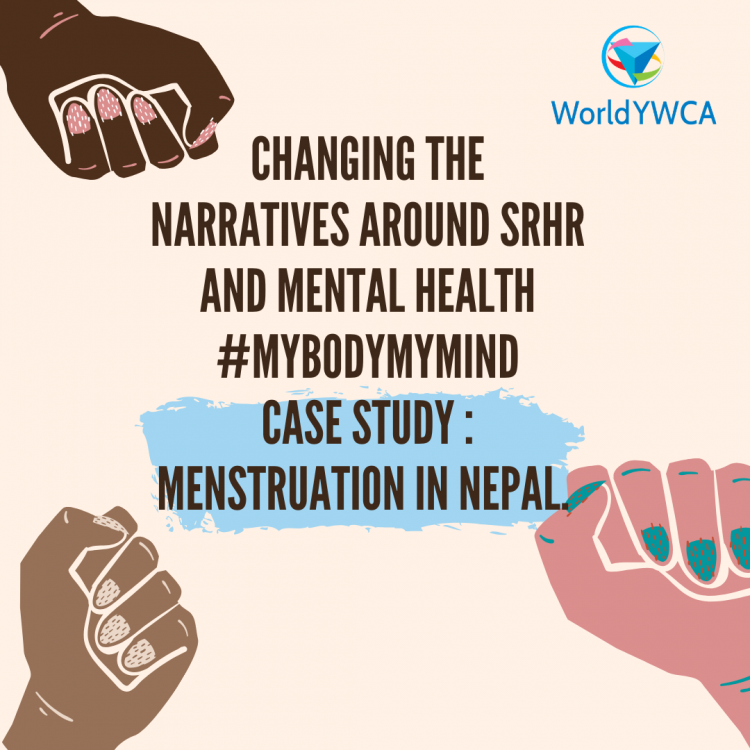 Young women are increasingly challenging the taboos, restrictions and dangerous isolation practices that their peers face during menstruation.

Nirmala, 29, describes herself as “just a random young woman from Western Nepal”. But truth be told, what this YWCA regional coordinator for Asia does every day makes her far more than just that.

Every week, Nirmala travels to different communities – many of them rural – to talk about menstruation. “The reason we focus on menstruation is because of the way it is treated in Nepal”, she explains. “The persistence of harmful beliefs and practices like Chhaupadi have a huge impact on women’s health, well-being and broader participation in society”.

In parts of Western and far Western Nepal, where Nirmala comes from, nearly eight out of ten girls spend their periods in “menstruation huts”. These huts are often made of mud and straw, and lack proper ventilation, sanitation, and space. During their stay, women and girls are exposed to the elements (both biting cold and suffocating heat); wildlife (particularly snakes); and opportunistic physical and sexual violence from passers-by.

The practice, known in different parts of the country as Chhaupadi, Chhui or Chhaupratha, also subjects menstruating women to more than 40 types of restrictions in the areas of food, touch, mobility and participation. For instance, menstruating women cannot enter a kitchen, a temple or a school; they cannot touch any male relative, pregnant women or child aged under five; they are not allowed to use community water sources; and they cannot eat rice, meat or milk products.

Forcing women to follow such practices was first outlawed by the Supreme Court in 2005, and then by the parliament in 2017 after a series of high-profile deaths (including one from a snakebite, and one from inhaling smoke in order to stay warm). However, the threat of a three-month jail sentence and $25 fine has far from managed to eradicate deep-rooted tradition.

“People remain convinced that menstruating women are impure, and that not following this tradition will curse their community,” says Nirmala. “This obviously impacts on women and girls’ mental health, as they start to feel impure and unworthy themselves.”

During her sensitisation sessions, Nirmala tries to change the narrative around menstruation by framing it as a natural process akin to digestion. She also emphasizes the need for personal hygiene. “Sometimes, just giving a more scientific explanation of why and how menstruation happens impacts on the way people perceive and react to it,” she says. But that approach doesn’t always work for everyone. “Different people need different approaches,” she confesses, “and lots and lots of time.”

Sometimes, someone attending her session might be convinced – but their family or broader social circle isn’t. “I’ve had people tell me ‘I know this, but my family doesn’t believe me and they still pressure me’,” says Nirmala.

Parents are Nirmala’s toughest audience. Some would protest her traveling to their communities in the first place. “I had to appeal to local and religious leaders just to be allowed to come,” recalls Nirmala. “This is where strategic relationship-building and trust come into play. You cannot just access mothers and daughters and sisters without the buy-in of every potential intermediary or guardian.”

One of Nirmala’s most successful interventions was in a school in Dakshinkali. Through regular visits, and relationship building with students, parents and teachers, she was able to transform the school from one that lacked toilet paper and clean water to one that now has gendered bathrooms, running water and closed-lid bins. “There’s no point trying to convince girls not to dropout during their period, if the schools aren’t able to provide them with what they need during that time,” she argues.

Dropouts are but one of the broader consequences of women’s treatment during menstruation. Generally speaking, the way menstruation is talked about reflects – and reinforces – a larger, dominant set of norms around gender behaviour and equality. “Being viewed as a source of impurity doesn’t just lock women up in huts. It impacts on their self-esteem; their ability to learn; and the confidence with which they demand their rights and are able to reach their potential. At the end of the day, it’s about control. These practices continue to tell women who they are, what they can do and where they can go. And that’s why we decided to focus on menstruation as a starting point for gender equality.”

Nirmala still has a long way to go. The affordability of sanitary pads (tampons are almost impossible to find) and the persistence of certain myths (namely, around the impact of such products on women’s hymen) remain barriers even to those that wish to have their periods and continue their daily routines. And of course, she still has deep-rooted norms and traditions to reckon with.

“I try to take things one step at a time” says Nirmala. “When my breasts started to grow, I thought I had fallen on my chest somehow and caused lumps. So, you can imagine what it was like when I got my period – I panicked. I had no clue what was happening to my body. My school teachers had deliberately skipped over the ‘puberty’ part of the curriculum. I cried all day until my mum came home and told me that this was just part of being a woman.”

While looking back at these experiences might make her laugh, they also strengthen her commitment to awareness raising, particularly in remote communities. “It’s this ability to work on the frontlines, and engage directly with women and girls of all ages, all groups, with different backgrounds, that drew me to join the YWCA in the first place.”