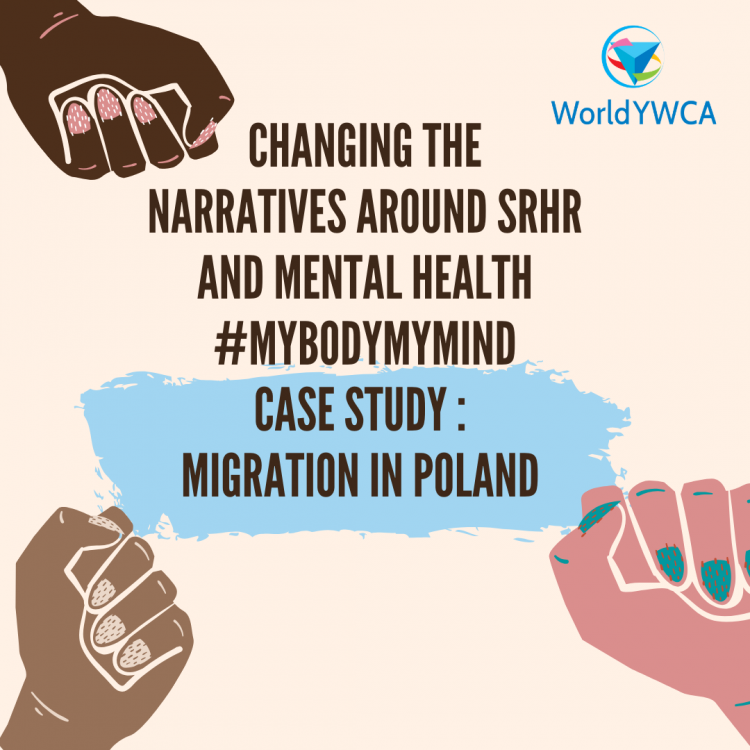 The World YWCA is a global movement working in more than 120 countries and 20’000 local communities. We promote the rights and leadership of women and girls from different faiths, ages, backgrounds, beliefs and cultures.

In Poland, stories of female migrants are used to spark otherwise taboo conversations.

When I first call Helena, I notice a few things at once. First, that her speech is peppered with ‘darling’s’ and ‘sweetie’s’ – a habit she blames on her Syrian upbringing. Second, that she’s a juggler. She’s just finished an article on the challenges that Syrian women face during their journey to Europe; and, has freshly published a blog entry on honour killings in the Middle East. Helena is also holding down a full-time job as Head of YWCA Poland, while pursuing a second PhD on violence against women, particularly in immigration contexts.

Helena’s focus on migration isn’t just the product of being an immigrant herself – it’s also related to the context in which she works. Topics relating to sexual and reproductive health and rights are difficult to address in Poland. The government has proposed legislation that bans sex education and treats it as ‘pedophilia’. Abortion bans are constantly debated, and the current coronavirus pandemic has made women’s exercise of their reproductive rights near-impossible.

“These taboos severely hamper the YWCA’s ability to act on its mission,” says Helena. “So, we had to be creative. We had to talk about women’s issues in a way that wouldn’t create friction or hostility with locally-held views. And that’s where our work with female migrants is key.”

By talking about issues faced by female migrants – namely access to healthcare and social services, mental health, freedom from exploitation and abuse – Helena is able to host a conversation and make crucial information available to the broader community, yet without involving them directly. “For example, we’ll mention where counselling services or shelters are available, and clarify that these are available to all individuals, even if our current advocacy is oriented towards refugees.”

This isn’t to say that female migrants – whether they are recognised refugees, asylum seekers or undocumented – don’t need help. In recent years, Poland has faced increasing immigration. While the elusive refugee status is predominantly conferred to children of Russian and Ukrainian origin, the country is also home to huge numbers of asylum seekers from Chechnya, Tajikistan and Georgia. Among them are many single mothers or mothers who left their children with relatives so that they could come make a living that they could send home.

“Most of the women that I’ve met have this fear of opening up. But once they do, you hear stories of domestic abuse, runaways, violent divorces …unfortunately, that’s almost never enough to justify a refugee status,” explains Helena. Migrants who are not blocked or summarily returned at the Polish border often end up in ghetto-like facilities. One such facility is Dembak, whose dismal living conditions had prompted a hunger strike in 2004 – and known no marked improvement a year later.

“You have to literally walk through a forest to get to this place – it’s far from town, with no public transportation. They’ll put a single woman in the same room as three men. Bathrooms are few and shared amongst many. Substance abuse, especially at night, is not uncommon,” describes Helena.

As a result, many individuals look for alternative shelter – such as the YWCA-supported orphanage in Warsaw, which hosts single mothers and their children; as well as unaccompanied women. Helena’s team also volunteers in a number of churches, connecting women with the Caritas network and helping to provide clothing, food …and education. “It starts with languages – any language that can help to find a job, or facilitate children’s integration, is of interest,” says Helena (incidentally, she teaches Arabic and English).

YWCA Poland also supports educational programmes oriented towards children. “In November 2019, we did this ‘flying conference’ with the Dutch embassy,” recalls Helena. “It was very focussed on finding better solutions for children’s integration in Poland, be it by making Polish classes more available, or improving their access to schooling regardless of their immigrations status….”

Meanwhile, Helena and her peers leverage their own networks to help woman find jobs. “A number of these women are able and willing to clean, cook or garden for others. Sometimes, we’re able to match them with a host family, and just that offers an incremental amount of stability”. Of course, this doesn’t detract from Helena’s simultaneous advocacy for better access to higher education, as she argues that this is a crucial barrier towards better business and employment opportunities for women.

“I think if there was one thing, just one, that I wish all women knew or were better encouraged to do, it is to keep pursuing their education,” she confesses on the phone. “Too often, the choices that these women are forced to make – having to run away, to stay off the streets, to feed a family back home – come at the price of their education. And this creates a vicious cycle of disenfranchisement.”

Sometimes, survival is so at the forefront of these women’s minds that their other needs – namely, regarding mental health – fall at the wayside. “We have two psychologists that women see,” says Helena. “We know what women are exposed to, during the migration journey. We’re aware of the stories. But that doesn’t make conversations about what a person went through and how this affects them any easier to start – especially when their livelihood is already on the line.”

And so, here, Helena resorts to the same technique mentioned earlier. She’ll talk about what other refugee women have been through, and the kind of help they were able to get, in order to indirectly inform the people she meets of the support they can – and are encouraged to – seek.

“We’ll share real stories, of real women with their real names. These are women who are now refugees in Sweden or in Germany”. She then adds, with what sounds like a smile, “I guess it helps that my thesis was also on this topic.”

By talking about the sexual violence – and subsequent mental health issues – that other women faced, Helena feels she is able to spark internal narratives in women’s minds. It’s not that they need her permission to have these thoughts or voice their experiences, she clarifies. It’s more that they feel less alone, and perhaps a tad more comfortable, bringing up their needs and asking for additional information on what resources are available to them.

“And that, sweetie, makes all of this very indirect and convoluted strategy, worth it.”