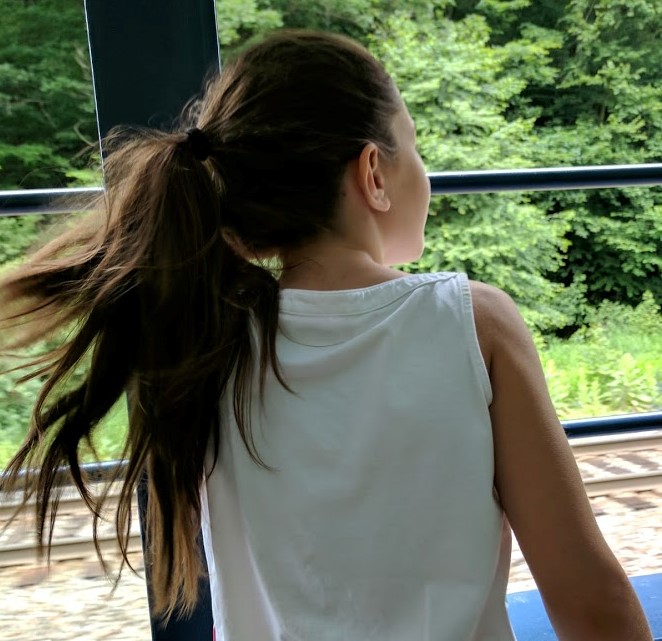 The following blog has been written by Casey Harden, General Secretary World YWCA, on the occasion of Week Without Violence 2020 (October 18-24).

Last week, I tweeted about the upcoming World YWCA Week Without Violence, as the General Secretary of World YWCA. I began the tweet, “Close your eyes… What would a week without violence look like for girls, young women & women?” My words were hardly very profound, rather trite even. Yet, in writing them, I found tears blurring my vision – a carryover from a conversation with my 11-year-old daughter the evening prior.

Having immigrated to a French-speaking country, my daughter is beginning to lose her grasp over English, her mother tongue. In an effort to keep her English intact, we are desperate to foster in her a reading habit. Vampire fiction seems to have captured her attention – with the tales of pubescent relationships and bodily changes commanding as much intrigue as the fantastic otherworldly beings within the story. As we ate dinner together that night, in a cozy setting with low lights and no dad or brother around, we discussed a vampire love story that we both knew. The conversation meandered from the magical universe that housed vampires to the very real one we inhabited, and she asked me, oh-so-earnestly, if I’d had boyfriends as a teenager. What was my first kiss like, she wanted to know.

In a world without violence, I would have told her a beautiful story of my first love. The story of how a childhood friendship slowly deepened into affection as we grew into teenagers, and how the two of us explored the spark that drew us to each other, carving out a space of our very own as intimate best friends. I would have told her of the butterflies I felt when he gave me a copy of his favourite book, inscribed with a lovely message. I might have regaled her with the story of how that had led to us having our first kiss. Stories of discovery, exhilaration, light-heartedness, freedom and fun.

Instead, I was speechless. My political self, the one fighting for women’s rights, was suddenly sharply juxtaposed against my personal self, the one raising my daughter. In that silence, an internal debate raged – whether to answer honestly or not at all.

To answer honestly, I would have to share my experience in a world with violence – a world that didn’t allow me to live out that beautiful story of first love. I would have to tell her how transgressions against me as a child prevented me from pursuing the spark – the affection and love – I felt for my friend. I would have to tell her that those transgressions prevented me from responding to the precious book in a different way. If I were to be honest, my maternal commitment to her would acknowledge this reality, and the ongoing fight against femicide, cyber bullying, child marriage and female genital mutilation.

To not answer at all would be to imply that she lives in world without violence, where memories of emotional and physical intimacy are simple and untainted. A dream world where sexual and gender-based abuse against children, refugee women, sexual minorities, and those living with disabilities does not happen.

People that have near-death experiences say that their life passes before their eyes when faced with their mortality. In those twenty speechless seconds, my sexual and gendered life passed before my eyes. Unfortunately, that life has witnessed much sexual and gender-based violence, unlike the lives of characters in her teenage romance novels. But finally, I did answer my daughter. What I said did not speak to sexual and gender-based violence. She hears about this from me quite a lot already, as a women’s rights advocate and as a mom – perhaps too much sometimes.

I told her what I hoped for her as she navigated her life as an adolescent, teenager, young woman and woman living in this world with violence. I told her that I hoped that she always felt like she had control over her decisions, her body and her heart. I told her that I hoped for her firsts – friendships, kisses, romances and other discoveries – to have magic in them. I told her that I wanted a life for her where she had personal freedom and agency, where she would not suffer any consequences for her decisions, and one she could look back on with a smile. I like to believe that my daughter heard me dreaming for her and every girl, young woman and woman, as she also acknowledged the echoes of reality flittering about, just beyond the vision of this utopia.

Women all over the world could tell my daughter their own version of this story – of a world with violence that they have endured and witnessed, repeatedly and incessantly. The violence that steeps our reality is known to us all, but in the Week Without Violence, we dream of a world without it. Throughout this week, we dream of the utopia I described to my daughter, and we will it into being through our actions, advocacy and public commitment to change.

This World YWCA Week Without Violence, join us in this global moment to reflect, educate and take action. Let us change the story that mothers tell their daughters, that women tell women, together.

See the toolkit and join us for the #WeekWithoutViolence2020.