Home » Coming Together as a Movement During CSW66 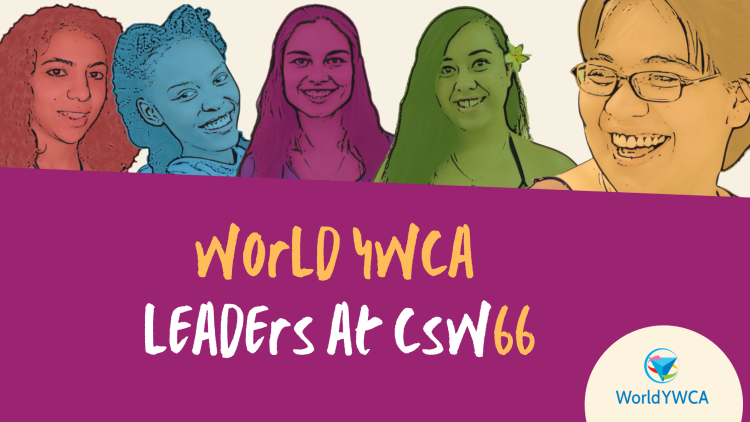 Intergenerational YWCA leaders from across the world came together virtually to engage at the United Nations 66th session of the Commission on the Status of Women (CSW66).

The events for CSW66 were held in a hybrid format from 14-25 March 2022. Given the ongoing challenges with the COVID-19 pandemic, UN Women advised making the best out of a virtual engagement considering no ground passes were issued. Nevertheless, through different avenues available for CSW66, YWCA leaders showcased the movement’s unique identity and leadership as a powerful global women’s rights faith-based movement. Whether networking, hosting parallel events at the NGO CSW Forum, advocating during formal and informal meetings, participating in interactive dialogues and campaigns, engaging in social media, or creating safe spaces, YWCA leaders joined the international community to advocate for gender equality and CSW66’s priority and review themes.

Click here to read the agreed conclusions adopted by CSW66.

Here are some of World YWCA @ CSW66 highlights!

“Women bear the brunt of climate change. They are not only well suited to find solutions to prevent further degradation and adapt to the changing climate – they have a vested interest in doing so. Let’s ensure their voices are at the center of #ClimateAction #CSW66. “

YWCA leaders also raised their voice in other virtual platforms such as podcasts in partnership with other international organisations. Click here to listen to YWCA leader Nanako Tojo from YWCA Japan sharing her reflections of CSW66.

We would love to celebrate other highlights we might be missing! Share your unique experience and thoughts about CSW this year by posting on social media using the hashtags #YWCALeaders #CSW66 or write a blog at She Speaks! You can always reach us at getinvolved@worldywca.org.