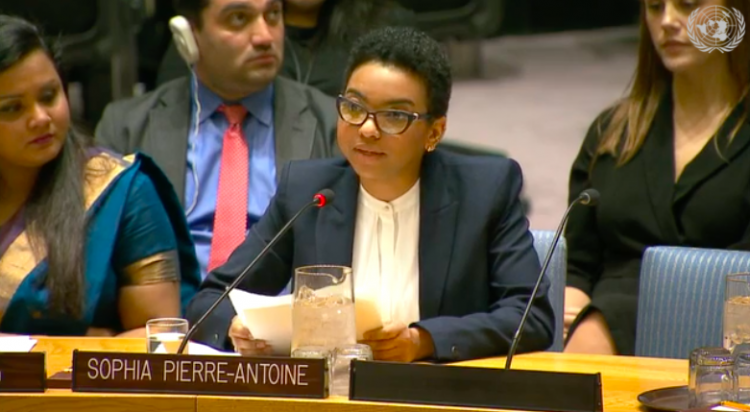 Today’s generation of young people is the largest the world has ever known, and young people often represent the majority of the population in countries affected by armed conflict. Far from being homogenous, youth are affected by conflict and peace in countless ways. Young people are often active in contributing to the peace and security of their communities and societies, but their work needs greater recognition and leverage to contribute to building and sustaining peace.

Here’s what youth champion Sophia Pierre-Antoine talked about in her powerful intervention during the first UN Security Council Open Debate on Youth, Peace and Security.

I am deeply thankful to His Excellency Ambassador Gustavo Meza-Cuadra of Peru for inviting me to speak to you today during this important debate on Youth, Peace, and Security.

My name is Sophia Pierre-Antoine. I was born in Haiti in 1991, as a coup d’Etat was unfolding. I was a teenager when the following Coup took place in 2004. Like many young women and men of my generation, my childhood and adolescence were marked by periods of violence and political instability.

Many would be quick to think that these challenging circumstances made my fellow young Haitians become frustrated, exasperated, violent, or helpless victims. Yet, we are the ones leading a daily struggle to ensure security in our streets, peace in our homes, and justice in our communities.

After the 2010 earthquake that killed hundreds of thousands of people and displaced over a million, the Young Women’s Christian Association of Haiti, a locally-led feminist NGO, for young women, by young women, was quick to offer psycho-social support in internally displaced camps. During one of the group therapy sessions in an area prone to conflict between rival gangs, a girl shared that she was not in fact afraid of another earthquake but afraid of older men coming into her tent at night. These girls were also afraid of the ones who were supposed to bring aid, but who in the end contributed to more abuse. For years, young women organized discussion groups and workshops to change attitudes and gender norms which contribute to the high rates of violence and impunity within the IDP camps and neighboring communities. In the process, they became community leaders and role models for younger girls to look up to. This is a testament to the importance of adapting peace-building work to a feminist and age-appropriate framework. Effectively addressing the concerns of young women and girls, including trauma healing, empowers and fosters leadership skills. The narrative of young women as powerless victims must be changed.

In communities I worked with, the rule of law was often not present. Local government and police were either absent, overwhelmed or complicit. Young men organized themselves and formed patrol groups to block gangs from entering their community. It would be easy, because of gender stereotypes, to see these young men as loitering or violent youth, when in fact they were only trying to protect their loved ones. Cultures that do not allow men to express their feelings and offer only violent role models foster an atmosphere in which unhealthy and oppressive behaviors are normalized and rewarded. This type of toxic masculinity creates situations that feed insecurity in the home, in the streets, and ultimately, for the entire community. The narrative of young men as perpetrators of violence must be changed.

I am standing in front of you today to talk about the gender aspect of youth, peace, and security. I urge you to recognize that transforming cities, public spaces, and homes, into safe spaces for young women and trans youth is a human right. This is what we are striving to obtain with the Progress Study.

I was privileged to be part of the consultations organized in the framework of the Progress Study for the Latin American and Caribbean region and at the global level. I witnessed the passion and drive of young peace builders globally. Discussing the topic of peace and security is not easy, and has led to deeply challenging but also profoundly honest conversations. We shared our experiences, our failures, our setbacks, but mainly our lessons learned and our victories. We were given a proper platform and a caring ear, and so we discussed openly. As a result, behind each of the recommendations of the Progress Study are multiple testimonies of pain, loss, disillusion, but also stories of courage, hope and success.

Such inclusive platforms for young women and young men to take part in peace and security discussions are rare. I hope Member States can replicate this inclusive participatory methodology in order to further support the work of young peace builders in their countries.

All of us, the young people who participated in the Progress Study, are very clear that we do not want more weaponized forces that terrorize the poor, the indigenous, the racial and ethnic minorities, those with disabilities and illnesses, and the LGBTQ youth. There is so much money spent in military action globally, when it could be spent on advancing the Sustainable Development Goals. Instead, young people called for investment in positive, peaceful and practical solutions. On behalf of all of us, and in particular on behalf of my fellow young women peace builders, this is what we are expecting from the Security Council:

Globally, we young people have achieved incredible milestones and contributed to peace and security efforts with very limited support and resources. Imagine what we could do if we had access to more data, to flexible funding, and we how we could contribute to policies and projects if we held more seats in governments, in UN agencies and in leadership of the public and private sector. It is by supporting our initiatives and movements, fostering partnerships, strengthening meaningful, diverse, and inclusive participation, and ensuring the protection of young women, young men, and trans youth, that sustainable peace can become a reality. 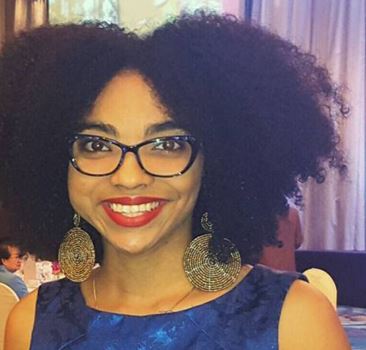 Sophia Pierre-Antoine is a young woman from Haiti and a member of the Young Women’s Global Advisory Council at the World YWCA, a global movement that works for women and young women’s empowerment, leadership and rights in more than 120 countries. She is also a board member of FRIDA Young Feminist Fund.