Home » The Season of Affirmative Yes! 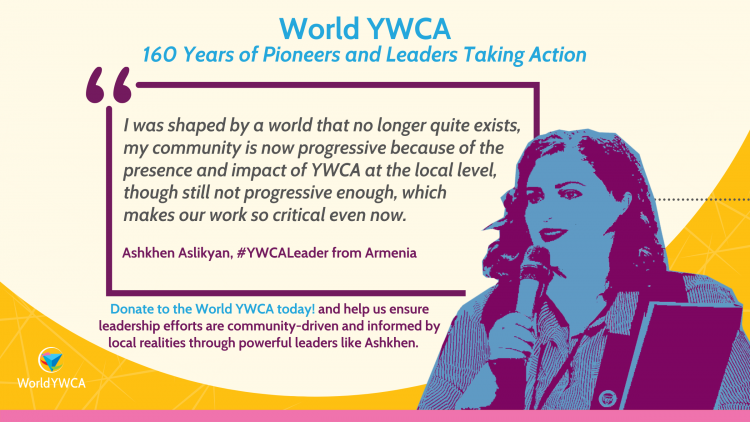 Born in a small village named Berdavan in Armenia, Ashkhen’s upbringing was conservative. There was so much she couldn’t talk about then because regressive attitudes of people within her community.

It took the Armenian young woman leader close to a decade to fully embrace the ideology of feminism, what it represents for her and to resolve the consequences of identifying as a feminist. While it is common knowledge that no one is born a feminist and we become feminists under different circumstances, the genesis of Ashkhen’s feminism, given she came from a very conventional community, is intriguing. “I lost my dad at a young age and my mum brought us up single handedly. To me she has always been my role model. She was the first feminist of my life.” Brought up in a community that stifled women and girls existence, Ashkhen always knew there was a different world where women are outspoken and at the center of key decision making.

Feminism constantly evolves- described, bound, unleashed and enacted in numerous ways. But for the young woman who described herself as a curious human being, her definition of feminism was sanctioned at the YWCA. Like many young women and girls her first day in the YWCA movement was an assortment of gratitude, admiration and a cautious decision to join the work.  She envisioned herself as a catalyst of change. “When my sister took me to a YWCA conference and I listened to the president, Aida, at that time speak, I thought to myself how fluent and confident she was to talk in front of all those people and all I knew is that I wanted to be just like her. I immediately felt a sense of belonging.”

The common denominator among all YWCA national and local chapters is the daily battle to fight the tides of adversity experienced by women, young women and girls. The YWCA strives to give each and every young woman and girl the opportunity to explore her life, both past and the imagined future. To be part of the YWCA for Ashkhen is to experience the stories and lived realities of women who came before her and to build her life as a woman.  To find comfort and space at the YWCA. This is the experience of so many women.

Stepping off the threshold of her childhood home, her homeland and nation, Ashkhen traveled to the World YWCA office in Geneva as a global intern in 2017. She was both scared and ready to explore the world on her own terms. It was during this time that the reality of her life in the Eastern Europe took a new shape. With clarity, she knew that a life was available for women and young women that was different than women in Armenia. It was a personal beckoning.

“During my stay I got to network with very many decision makers. I visited the UN Geneva building, which mesmerized me to the core. Reflecting on my journey at that moment I came to the realization that I was one of the first young women from my village to have achieved that much. I felt a sense of immense responsibility to myself and other young women and girls back in Berdavan.”

She says her experience working at the World YWCA as a long term intern changed her for better. She better understood leadership, mentorship, and sisterhood and how these concepts must be practiced to be true to their essence.

“When I was living outside of Armenia, I realized that it is possible to live without being anxious all the time. So I tried to bring this sense of calmness and determination back home with me.”

The YWCA movement commits to comprehensive inclusion of individuals from all backgrounds, providing them with platforms to express themselves in their own unique way. An ideology that Ashkhen confidently alludes to, “I was shaped by a world that no longer quite exists, my community is now progressive because of the presence and impact of YWCA at the local level, though still not progressive enough, which makes our work so critical even now.” Living in a country that has been flawed with political violence and tension the self-acclaimed feminist consistently works for organizing at the local YWCA chapter.

“This year has been a rough year especially for my country Armenia because of war and as a leader there is no way I would have stayed at a neutral position so through the help of YWCA organization, with my sister we managed to start a movement where women would meet and knit for children and soldiers who were at the front line. Many women who didn’t even know about the YWCA came out in large numbers to assist and this gesture made me so happy because I felt we had brought women of Armenia together through this initiative.” A simple thing, this community connection became a political statement made by the women, young women and girls of Armenia. Led quietly, yet passionately, by Ashkhen.

When you ask Ashkhen about what inspires her every day, she sighs and shares the stories of amazing women and young women around her. With a war ongoing in the region for such a long time, she reminds us of the war inside her as well. She talks of remarkable women who have touched her life in multiple ways in multiple spaces – and how these learnings still continue to shape her.

As YWCA continues to influence communities both at the global and local level, it is evident that its work and purpose is part of an immense endeavour to change how communities imagine gender rights, equality, consent, voice; to create a conversation that invites participation for those who have felt excluded and silenced. To many YWCA is the space that helps them to project their voice on issues affecting them and those within their communities.

“My sisters at the YWCA movement have been a great inspiration to me and I remember sometime back when one of them told me, when you are offered an opportunity first say yes and then learn how to do it. It has been a season of affirmative yes! And this has become my mantra every day.”

Today many women, young women and girls are waiting for their affirmative season of yes! With your support World YWCA will ensure that women are provided with platforms to strengthen their leadership, just like Ashkhen.