Home » The Solitary SRHR activist finds her home in YWCA 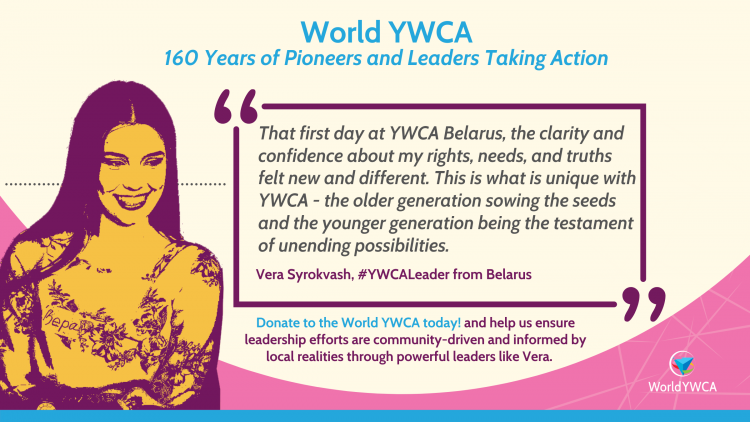 For Vera Syrokvash, at the age of six years old, she was already a solitary feminist though unaware of it. As a child, Vera often did not understand why girls were treated differently. Her desire to argue and finding out the truth was not encouraged. There were many prejudices at school towards girls.

When she was older, she discovered the unspeakability of violence against women and girls and the denigration, harassment and silencing that went with it. There was no room to discuss these things, and Vera found solace in education and books hoping to find the answers she needed in every page and chapter that she turned.

Vera’s sociology professor had established the YWCA center in Belarus and noticed the young woman’s thirst to unpack pertinent issues that affected young women and girls invited. She invited Vera to a YWCA event. Vera was supposed to lead a discussion on a book she had read about femininity, masculinity and feminism.

“That first day at YWCA Belarus, the clarity and confidence about my rights, needs and truths felt new and different. This is what is unique with YWCA – the older generation sowing the seeds and the younger generation being the testament of unending possibilities.”

When reflecting on the YWCA space – she answers with a long pause and a little sigh- “Have you ever stepped in a room and the first instinct you feel is at home? Well, I know home means different things to different people but I established a home at YWCA. For the first time I was surrounded by a group of young women and girls who thought like me, who asked the questions that I too needed answers to and this time round I was not afraid to establish personal and long term connections because I knew I will be staying at this space.”

Today, six years later, the young woman who was often too shy to assert and proclaim herself has now assumed different roles within the movement and has represented young women and girls of Belarus and those in Eastern Europe in different forums both locally and globally. “I think of myself as a global activist because of the things am able to influence, people I am able to connect with and the partnerships I am creating every time I get an opportunity.  I know this has been possible because of the existence of YWCA.  The support and focus on young women to be at the center is core to the work of YWCA. This is what has personally played a huge role on my foundation and work as an activist.”

Through YWCA young women and girls learn from each other to look harder, see farther, ask new questions, use new terms that admit new possibilities- and Vera has been one such young woman.

Vera believes that nobody can learn in a silo and achieve much. She reinforces how her experience of moving from being misunderstood and feeling alone to meeting a group of her own at YWCA – a group of diverse women, young women and girls facing many issues within their communities – helped her understand the urgency of issues that needed to be addressed. It is against this backdrop that Vera’s activism gained depth and wisdom- learning about violence against women and girls, the need for immediate interventions on sexual and reproductive rights of women and young women and activism in political spaces.

“There is a reason my peers refer to me as “the solitary SRHR activist” says the 26 years old introvert advocate. Affirming that she got the best foundation as an activist at YWCA, Vera says she is not stopping anytime soon and on the contrary – she will continue to use any platform within her reach to instigate changes in the SRHR agenda.

“I want this to be the main focus of attention in Eastern Europe where bodily autonomy does not exist, access to contraception and sexuality education is extremely low and gender based violence is still a huge challenge. I want more women and girls to be at the center of bringing change in their respective communities.”

Vera has represented the European YWCA in the European Youth Forum where she does what she does best – advocate for the rights of young women and girls, where she earned the opportunity to volunteer with the Y-peer network, working in the field of sexual and reproductive health with the United Nations Population Fund. She also coordinates the Eastern European region for World YWCA’s initiative on young women changing narratives on SRHR and engages with young women every day.

In Vera’s story we see the endless possibilities that the YWCA showcases – the potential to eliminate all forms of violence against women and most importantly bringing forth a new generation of young women and girls who are assertive and not afraid to speak out against inequalities in their communities and the world.

Today, the world needs more young women leaders like Vera, doing their solitary feminist work with persistence and passion – embedded and supported by World YWCA. World YWCA needs you to invest in present and future leaders like Vera to make a better world.