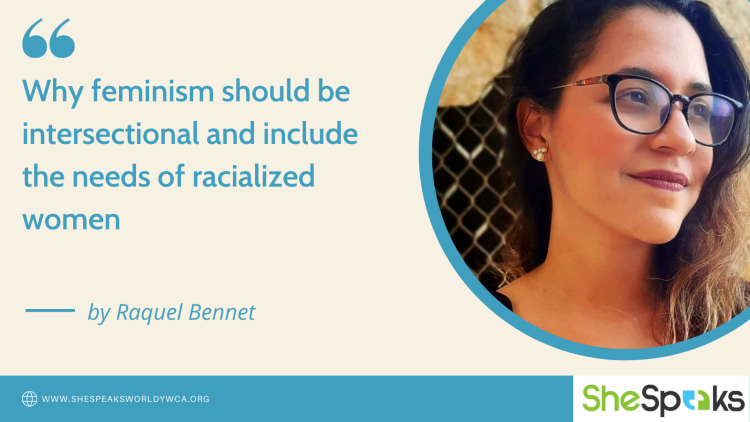 During my 27 years of life, I consider that feminist beliefs have been present in me ever since I started to understand how the world works (and even before I even knew what this political movement represented). Being raised by my mother and grandmother and with a father that has been absent my whole life, I grew up understanding in practice how women are disproportionately affected by family responsibilities and the expectations of a society that privileges men in most aspects.

I was born in the capital of Brazil: a small city called Brasília, which is filled with trees and has beautiful and unusual architecture. I grew up to be a young girl full of potential and dreams. At the age of twelve, I won a scholarship to study French, which has opened my eyes to how big the world was. This opportunity, together with living in the political center of the country, has inspired me to study international affairs as my main degree – an experience that has put me in touch for the first time with the theme of gender and other inequalities. This was the door that led me to study how women in the globe experience life in different manners, and how we cannot understand the complex issues faced by this heterogeneous group without intersectionality.

In Brazil, 54% of the population is afro descendant – a group that I am proud of belonging to. However, being an afro-descendant woman living in a country colonized by Europeans and built with the slave labor of the black population, has made me experience life in very different ways when compared to white colleagues. Experiences such as being treated as less capable, less valued and as someone supposed to serve and work more than others have followed me through all my life.

This resonates with the big challenges that women in my country still face when we talk about femicide and GBV.  It is not a coincidence that women like me are the biggest victims of violence in Brazil. 66% of femicides occurred in 2019 had as victims afro-descendant women. According to recent data, in 11 years, the cases of homicides of non-black women in the country have decreased by 27% – a data that may indicate an evolution until you analyze how the afro-descendant portion has been facing this same issue. Contrary to the tendency seen in the white portion of the population, homicides of black women have increased by 2% in this same period (according to Atlas da Violencia, 2021). These data show how everyday Brazilian women from different racial groups have different opportunities in life (as personally experienced by me) but also face different risks of becoming victims of violence.

Women like me are also the ones that face the worst situation of poverty, health access and unemployment. Tendencies that one more time indicate how groups that are historically marginalized and excluded from main spheres of power must be taken into account and receive a different look.

Through my journey as an activist, I realized how the needs of women like me are often not considered, and I soon learnt my biggest challenge as a feminist activist. Activism that considers broad data and stories but does not make visible the challenges summed by the other types of inequalities a woman may face is limited. Without having in mind the different portions and experiences of women, we fail to acknowledge the spectrum of violence faced everyday by this very heterogeneous group in the most different contexts possible. We create rules and agendas that do not support all women, but rather create general tendencies that do not represent all of us and make invisible the issues faced by the most affected parts of society.

We must fight for approaches of feminism that consider other power inequalities, historical and colonial dynamics that cause the masculine gender to structure this cycle of oppression. Without building systems that are anti-racist and support systems that include the needs of racialized women, the fight against gender-based violence will remain incomplete.