Home » #IWD22: Women Do Not Start Wars, but They Do Face the Worst Consequences 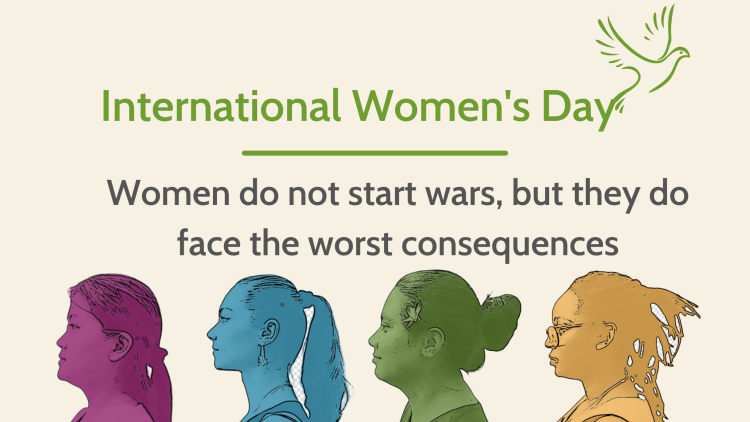 This International Women’s Day, listen-watch-read from some powerful YWCA leaders on their journey towards Peace and Justice as the YWCA movement.

We know that war, conflict, and violence impact women, young women, and girls differently. In times of conflict and instability, women, young women, and girls are at severe risk of sexual violence, abuse, displacement, increased poverty, trauma, and exacerbated issues of gender inequality, health, and education access. We believe in a world with peace and justice, and that women’s involvement and leadership are essential to achieving this vision. We know that the active participation of women and young women in peace processes and implementation is vital to building peace that is not only inclusive and effective, but lasting.

Peace with justice has been a constant vision and goal throughout the more than 160 years of the global YWCA movement, as we know that not only are women, young women, and girls profoundly, negatively impacted by war and conflict, but their leadership is essential to promoting non-violence and achieving lasting peace and justice.

War impacts women and girls suffered disproportionately during and after conflict. Women don’t start wars, but they suffer the worst consequences. At least 21 million women and girls were uprooted within their countries by conflict and violence by the end of 2018.

Did you know that in 1855 when the Y.W.C.A. was founded in England its first practical job was to find homes for nurses returning from the Crimean war; which incidentally, saw also the founding of the Red Cross. [i] In more than 160 years of existence of YWCA, catering to the needs of communities, especially those affected by war, violence and other forms of social injustices, has been the key priority. Today, be it the decades of ongoing war and violence in some countries, or the impact of COVID-19 and climate emergency, YWCA women and young women’s response to community is of high importance. YWCA leaders – women, young women and girls, from all around the world stand for the rights of communities almost immediately and consistently.

“We have seen devastating impacts from Hiroshima and Nagasaki. Women have been affected by war far more than men. We have a responsibility to raise our voice as women,” says  Sayaka Higuchi YWCA Leader from Japan, in the virtual panel #BulletAndDove first panel From Solidarity and Peace Resolutions to Reality on the Ground, discussing the contexts, stories, and realities on the ground of Palestine, Armenia, and Japan, while elaborating on peacebuilding and advocacy efforts led by #YWCALeaders to find concrete actions  that can be taken to contribute to peacebuilding efforts driven by communities affected by violence, conflict, and war.

YWCA leaders in these countries have been working together to strengthen the international solidarity and support within these spaces, to have more women and young women be part of conversations like UNSCR 1325, 2250 and more. They actively provide support on ground, while leading policy conversations at the national and global sphere.

“From the beginning of human history in the world until now, there have been women who have taken part in the state of war in peace-building efforts. It turns out that this role is still very important today! Armenian women must work hard to play a pivotal role in peace-building. This is one of the unwritten laws of tradition. Let’s reflect together: in war men usually fight, while women live with the consequences.” Says Aida Zurabyan, President of YWCA Armenia in her article calling for peace during the Armenian war.

War impacts women differently, with women and girls suffering more the impact of war with forced internal or external displacement, economic implications, less access to resources or health and education infrastructures, and an increased risk of violence against women in the situation of conflicts.

“Every woman in Belarus has experienced gender-based violence, been harassed on the street and in abusive relationships. It’s not only physical but psychological as well.” says YWCA Leader Vera Syrakvash in the podcast “ Organising & Acting for Peace & Justice”. In the podcast Vera Syrakvash talks about attending the massive protests in Minsk, Belarus against authoritarian President Aleksandr Lukashenko, who has been in office since 1994, where some women were severely beaten and even raped. Vera, as a YWCA Leader has been consistently supporting women, young women and girls in the Eastern European region empower themselves around their rights, work together in solidarity and continue fighting for human rights.

In a recent blog by Muna Killingback, a YWCA Leader she mentions about how the YWCA has given women a voice in all kinds of policy forums where they would not have been represented, and how this made a tremendous difference. She further reflects the interlinkage between war, human rights violations, SGBV and women.

“We should particularly work to strengthen the UN and give teeth to the International Court of Justice and the Rome Statute of the International Criminal Court so that all countries, no matter how powerful, have to abide by international law. Some will say that this is not a feminist agenda, but if women, who are more than half the world’s population, just say no to war, imagine how powerful that will be.” says Muna Killingback in here interview for the 16 Days of Activism series of World YWCA

Women have a crucial role in war, they are actively engaging to support troops, support families, keeping everyone safe. Women carry the burden and responsibilities to care for others, while facing the worst consequences of war. While wars are initiated by men in the majority of cases, women are not included in decision making or in the process of peace negotiation.

We need to increase women’s role in decision making related to conflict prevention and resolution to shape peace together. When women are involved, outcomes change. Including women in policy making is a work in progress, says Maria from Kenya in the podcast “ Organising & Acting for Peace & Justice” . But how do we engage more women and youth in policy work?

During a conflict, women often lack access to information and tools needed to effectively advocate, and in many cases, they are silenced and threatened. Digital media has emerged as an accessible and impactful way to reach out to newer generations of activists, empowering them with the information and networks needed to enact change, while giving them the possible to hide their identity for safety or engaging in various way online while not putting their life or their family in danger.

In 2021, World YWCA launched a four-episode advocacy toolkit podcast series on intergenerational approaches on women and war- in light of movement building, community mobilization, policy advocacy and campaigning. This four-part series produced by the World YWCA, takes a look at successful campaigns from recent times within YWCA and the larger women’s rights movement, while talking about the stories behind them- as a hands-on guide to advocacy success.

Women’s role in peace and justice is critical for future generations. Excluding women from decision making, negotiations and conversations should not be entertained anymore. We all know that if women were more involved in decision making, there would be more attention paid to gender-related elements in deliberations and the text of peace treaties, more inclusive solutions and more peaceful world.

World YWCA stands resolute in consistently working towards a world where peace and justice is a reality for all, calling on governments and international institutions to acknowledge and prioritise women’s participation in peace processes.

Note: this article is a short summary of some recent work and does not highlight the complete breadth and depth of the work being done over decades by YWCA leaders around the world on peace and justice. For more information visit YWCA country chapters websites or reach out to us at worldoffice@worldywca.org.