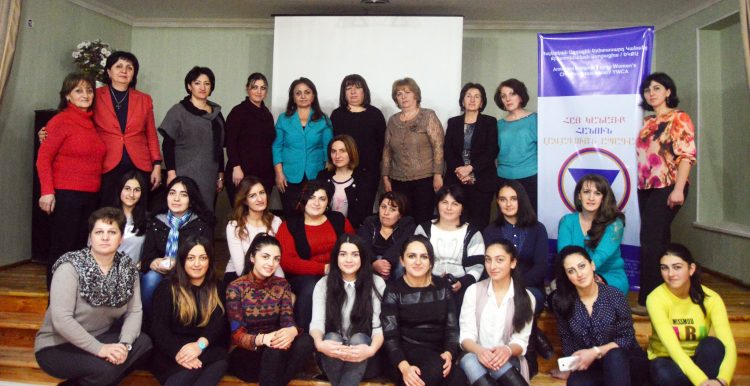 You are leaders and your voices are key to promote and keep peace. I stand with you and say “NO” to wars and violence.

Today, I want to talk about war and peace and the power of diverse girls and women leaders.

Let me start by introducing myself and the beautiful yet war struck region I come from. I was born in the Tavush region of Armenia, which has a 300 km border with Azerbaijan. This is my home. However, the population of my region has been “living” in a warzone for about 30 years due to the Nagorno-Karabakh conflict. On July 12, 2020, Azerbaijan again launched an armed attack on the Tavush border, to which the Armenian army had to respond. This war situation is an ongoing one until this day.

Recently this year, the United Nations Security Council adopted Resolution 2532, which expresses its support for the Secretary-General’s appeal for a global ceasefire that he issued in March to help unite efforts to fight COVID-19 in the most vulnerable countries. Armenia formally supported the adoption of this resolution that requires a total and immediate cessation of hostilities in all situations.

The main activity of the YWCA of Armenia takes place in the Tavush region. Now we are compelled to fight two wars, one visible- COVID19 and one invisible-Azerbaijani aggression. It is very difficult to continue living in this situation that cannot be reasonably anticipated or controlled. It has been a challenge for the YWCA to lead peace-building efforts in Armenia.

I have many things to say about war to each of you. To all girls and women leaders from diverse faith background, I share with you my thoughts on the recent military conflicts. There are many questions about war and peace, the answers to which are uncertain. My words are not pathos and rhetoric, I just think out loud and share with you. From the beginning of human history in the world until now, there have been women who have taken part in the state of war in peace-building efforts. It turns out that this role is still very important today! For example, women of our region Tavush, have been actively engaged in the affairs of women and children, many of them see the solution of this problem in their faith. Armenian women must work hard to play a pivotal role in peace-building. This is one of the unwritten laws of tradition. Let’s reflect together: in war men usually fight, while women live with the consequences.

Historically, women have played a secondary role (secondary because we are not seen physically strong, therefore not included in these decisions) during the war, and in that secondary role, only supporters, mourning the loss of a lost relative, fighting the irreversible pain. Often their lives turn from this and social roles change, they change their identity, which breaks with tradition. But women have much more to say, which is beyond the scope of social norms. As we know, armed conflicts take place in different stages: a) pre-war stage, b. the conflict itself, c) post-war conflict resolution – reconstruction and reintegration. In the case of Armenia, especially the Tavush region, these stages are constantly repeated and follow each other.

Dear girls and women from YWCAs and the broader women’s movement, we need your support and collective voice to overcome this situation, to do real work, for real results.

Your voice is important. Our voices matter in this. Because women are for peace, not just against war. In your own way, you can do many things to make change happen:

Can we turn the responses into collective messages to present the power of women FOR peace to the world as the voices of women, voices for larger good?